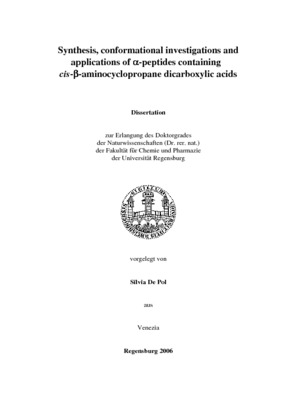 In this work different alpha-peptides containing two enantiomers of cis-&#946;-amino cyclopropane carboxylic acid (&#946;-ACC) were synthesized in order to extend our knowledge regarding their conformational preferences. Alternated peptides alpha-L-Xaa-&#946;-ACC were synthesized and their conformations were investigated by IR, CD and NMR spectroscopy. Short alpha-L-Ala-&#946;-ACC alternated peptides in a polar solvent like methanol adopt well defined helical secondary structures. When one enantiomer was incorporated, the peptides showed a 313 helix turn involving a hydrogen-bond between the NH of the first &#946;-ACC and the C=O of the following &#946;-ACC unit. The CD spectrum corresponding to this structure shows a minimum at about 200 nm. CD spectra, which were measured in different solvents such as trifluoroethanol or hexafluoroaceton and in methanol with different amounts of water, suggest that the stability of the 313 helix-turn is strongly dependent on the environment. The NMR data obtained from the analogues containing the other enantiomer of &#946;-ACC display a structure, which is less well defined. There is likely a set of conformers which rapidly interconvert on the NMR timescale. CD investigations in different solvents show patterns that are almost solvent independent. The solvents investigated are probably not able to stabilize one conformation with respect to another one. In the second part of this PhD work, &#946;-ACC units were used as building blocks in biological active analogues of neuropeptide Y and RGD peptides, inducing a particular spatial orientation of important side chains for the interaction. Some &#946;-ACC containing peptides are found to be able to enhance the biological affinity to the corresponding receptor. Conformational investigation on them allowed us to collect more information about the active conformation being responsible for the binding or at least on the conformation that is recognized by the receptor. Cyclic pentapeptides containing the typical integrin recognition sequence Arg-Gly-Asp were synthesized and their affinities to the alphaVbeta3 receptor were investigated. The alphaVbeta3 integrin receptor subtype plays an important role in many physiological events and it is a potential pharmaceutical target for treatment of several diseases including tumors. The stereochemistry of the &#946;-ACC moiety is decisive for the receptor affinity. One pentapeptide is found to have a higher affinity compared to the reference peptide c(Arg-Gly-Asp-D-Phe-Val). Conformational NMR investigation on this peptide shows the Arg-Gly-Asp segment in the positions i to i+2 of a type II� &#946;-turn in which the &#946;-ACC moiety occupies the position i+3. The introduction of the &#946;-ACC moieties in the C-terminal dodecapeptide of the NPY, at the position 10 (position 34 corresponding to the full length NPY) led to a shorter NPY analogue which is able to bind the Y1 NPY receptor subtype with good affinity and selectivity. The secondary structure of the most selective analogue was investigated by 2D NMR in the presence of micelles that mimic the cell membrane, in order to gain information about the conformation that is recognized by the Y1 receptor subtype after the absorption step on the cell membrane. The observed secondary structure, differs substantially from the conformation present in the C-terminal part of the full length NPY, both from the helical structure found in solution in the presence of micelles, and from the typical PP-fold that has a flexible C-terminus. The N-terminus of the peptide shows an amphiphilic helix that exposes hydrophobic side chains on one side, presumably forming the micelle-binding interface. At the C-terminus, the &#946;-ACC moiety interrupts the helix and induced a turn-like structure. This conformation could be responsible for a particular orientation of the key side chains for the receptor recognition leading consequently to receptor selectivity