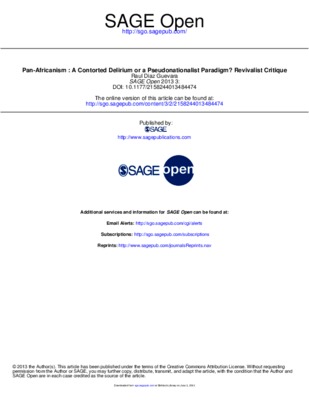 Pan-Africanism: a contorted delirium or a pseudonationalist paradigm? Revivalist critique

This essaic-article goes against established conventions that there is anything ethno-cultural (and hence national) about the so-called African tribes. Drawing largely from the culture history of precolonial/prepolitical Africans—that is, the Bantu/Cushitic-Ethiopians (Azanians)—the author has demonstrated vividly that far from being distinct ethno-culture national communities, the so-called tribes of African states are better considered subculture groups, whose regional culture practices erstwhile paid tribute to their nation’s main culture center in Karnak. For example, using the culture symbols and practices of some local groups and linking them to the predynastic and dynastic Pharaonic periods, I argued that there is compelling evidence against qualifying Africa’s tribes as distinct ethno-culture national entities. In genuine culture context, I stressed that the Ritual of Resurrection and its twin culture process of the mummification of deceased indigenous Pharaohs tend to suggest that the object of the Bantu/Cushitic-Ethiopians national culture was life (in its eternal manifestation) and then resurrection later, and that there are recurring (culturally sanctioned) ethical examples among the culture custodians of these subculture groups that generally pay tribute to the overarching culture norm. Furthermore, the fact that the Ritual of Resurrection began in the Delta region and ended at the Sources of the Nile, where the spirit of the deceased indigenous Pharaohs was introduced into the spiritual world of their ancestors, contradicts conventional perceptions that ancient Egypt was a distinct national community isolated from precolonial/prepolitical Africa/Azania