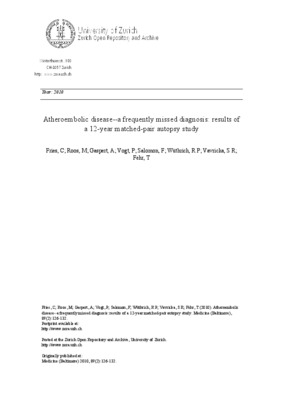 Diagnosis of atheroembolic disease (AD) is challenging, because no specific test is available and AD often masquerades as other clinical conditions. We conducted the current study to investigate the relative frequency of autopsy-proven AD over time, to describe its clinical presentation, and to identify risk factors for AD. We screened 2066 autopsy reports from 1995 to 2006 for AD. For each AD case, a control patient without AD was matched for age, sex, and autopsy year. Diagnostic and therapeutic interventions (surgery, catheter interventions, and drug treatment) in the last 6 months before death, as well as clinical and laboratory parameters during the last hospitalization, were retrieved from electronic charts. We identified 51 patients with AD. Among these only 6 (12%) had been diagnosed clinically. The organs most often affected were kidney (71%), spleen (37%), and lower gastrointestinal tract (22%). The relative AD frequency decreased over time from 3.5 to 0.5 per 100 autopsies, whereas the frequency of clinically suspected and biopsy-proven AD remained constant. Among clinical signs, skin lesions such as livedo reticularis and blue toe (33% vs. 14%; p = 0.04) were significantly increased in AD patients compared with the matched controls. We also observed a trend for higher incidence of eosinophilia and proteinuria in AD patients. Vascular interventions within 6 months before death were highly associated with AD (55% vs. 29%; p = 0.01), and in a multivariable analysis this remained the only significant risk factor for AD. Thus, the diagnosis of AD is frequently missed. Vascular interventions represent the most important risk factor for AD and should be performed restrictively in high-risk patients