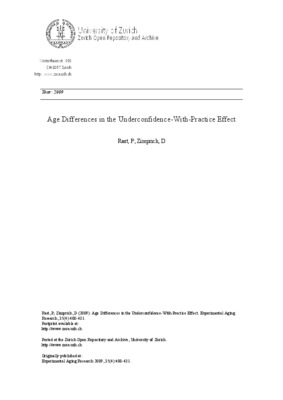 Age Differences in the Underconfidence-With-Practice Effect

In two verbal learning experiments, the authors examined the accuracy of memory monitoring and the underconfidence-with-practice (UWP) effect in younger and older adults. Memory monitoring was operationalized as judgements of learning (JOL). An open issue is whether UWP can also be found in older adults. In the first experiment, both younger and older adults overestimated their memory performance in the first trial, but the older group differed from the young group in the second trial. The JOLs given by older participants matched, on average, their recall performance. In fact, the UWP effect was not observed in any of several conditions in older participants. In the second experiment involving five study-test cycles and two age groups, the same basic pattern of results was present: Older adults did not show an UWP effect. These findings appear to fit into a framework of dual factors affecting JOLs, which posits that the magnitude of JOLs derives both from an anchoring point and from on-line monitoring of items