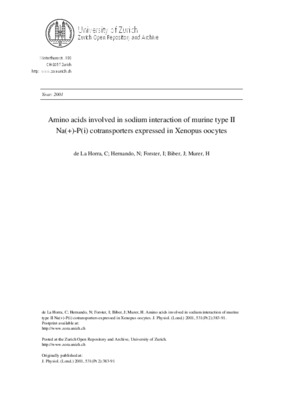 Type IIa and IIb Na+-Pi cotransporters are highly conserved proteins expressed in brush border membranes of proximal tubules and small intestine, respectively. The kinetics of IIa and IIb differ significantly: type IIb is saturated at lower concentrations of Na+ and Pi. To define the domain responsible for the difference in Na+ affinity we constructed several mouse IIa-IIb chimeras as well as site-directed mutagenized cotransporters. Pi uptake activity was determined after injection of cRNAs into Xenopus laevis oocytes. From the chimera experiments we concluded that the domain containing part of the second intracellular loop, the fifth transmembrane domain (TD) and part of the third extracellular loop determines the specific Na+ activation properties for both types of cotransporter. Within this domain only a few residues located in the fifth TD are not conserved between type IIa and IIb. Site-directed mutagenesis on non-conserved residues was performed. Substitution of F402 of IIa by the corresponding L418 from IIb yielded a cotransporter that behaved like the IIb. On the other hand, substitution of the specific L418 of IIb by the corresponding F402 of IIa produced a cotransporter with a Na+ activation similar to IIa. (Single letter amino acid nomenclature is used throughout the paper.) These data suggest that the specific Na+ activation properties exhibited by type IIa and type IIb Na+-Pi cotransporters are at least in part due to the presence of a specific amino acid (F402 in IIa, and L418 in IIb) within the fifth TD of the protein