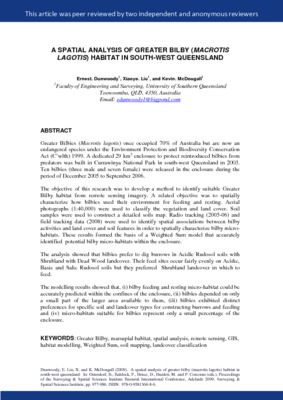 Greater Bilbies (Macrotis lagotis) once occupied 70% of Australia but are now an endangered species under the Environment Protection and Biodiversity Conservation Act (C'wlth) 1999. A dedicated 29 km2 enclosure to protect reintroduced bilbies from predators was built in Currawinya National Park in south-west Queensland in 2003. Ten bilbies (three male and seven female) were released in the enclosure during the period of December 2005 to September 2006. The objective of this research was to develop a method to identify suitable Greater Bilby habitat from remote sensing imagery. A related objective was to spatially characterize how bilbies used their environment for feeding and resting. Aerial photographs (1:40,000) were used to classify the vegetation and land cover. Soil samples were used to construct a detailed soils map. Radio tracking (2005-06) and field tracking data (2008) were used to identify spatial associations between bilby activities and land cover and soil features in order to spatially characterize bilby microhabitats. These results formed the basis of a Weighted Sum model that accurately identified potential bilby micro-habitats within the enclosure. The analysis showed that bilbies prefer to dig burrows in Acidic Rudosol soils with Shrubland with Dead Wood landcover. Their feed sites occur fairly evenly on Acidic, Basic and Salic Rudosol soils but they preferred Shrubland landcover in which to feed. The modelling results showed that, (i) bilby feeding and resting micro-habitat could be accurately predicted within the confines of the enclosure, (ii) bilbies depended on only a small part of the larger area available to them, (iii) bilbies exhibited distinct preferences for specific soil and landcover types for constructing burrows and feeding and (iv) micro-habitats suitable for bilbies represent only a small percentage of the enclosure