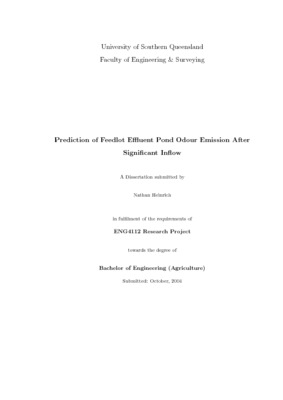 By Nathan Heinrich
Get PDF (9 MB)

Feedlots in Australia have long been associated with odour, and as such, in the early 1990's research was carried out in order to better understand the processes driving the odour generation. Since that time, many practices have been identified as contributing to the odour problem, and feedlot management has changed to minimise the odour emissions. This has resulted in a distinct lack of odour emissions data relating to 'modern' feedlots. Feedlot pad surfaces represent the largest odour emitting source, however, after a rain- fall event, the odour emissions from the effluent ponds increase to a point where it may exceed that of the feedlot pad surface. Despite this, there has been little Australian research carried out to determine and predict the odour emissions from feedlot ponds after an inflow event. This project set out to develop a model to predict the odour emission rate from the effluent ponds at a feedlot after a significant inflow. Odour samples were collected every few days for a period of time after an inflow at two commercial feedlots in Southern Queensland and Northern New South Wales, and assessed to determine the odour emission rate. The collected data displayed a similar pattern of odour emission to that measured in the early 1990's, reported by Casey et al (1997). At both feedlots, the odour emission rate from the primary holding pond rose quickly to a peak (454 and 578 ou/s.m2) within 5 - 8 days, and then declined steadily back to 'normal' levels within 25 - 30 days. A model was developed to reproduce the pattern of odour emissions from the primary holding pond at each feedlot. The model is a two-stage empirical algorithm, and is dependent on the inflow ratio, the 24 hour average ambient temperature experienced during the days of the rainfall event and the number of days since the first day of the rain event. A parameter named 'Peak Day' defines the two stages of the model, and is read from a table developed from the measured temperature data. It is known that the pond condition does impact the odour emission rate (Hobbs et al, 1999); however the current body of research is not conclusive, and not enough pond condition data was collected during the course of the project to permit this model to include pond condition parameters as input. The model was tested with a number of hypothetical scenarios, and was also validated using the data collected by Casey et al (1997). The model was shown to be reasonably robust to moderate changes in parameter values, but failed to accurately reproduce the odour emission patterns measured in the earlier work. This was attributed to the different management practices of feedlots between the two data sets, and the simplistic nature of the model developed. The limited number of odour emissions data sets and supporting data meant that a comprehensive model could not be developed