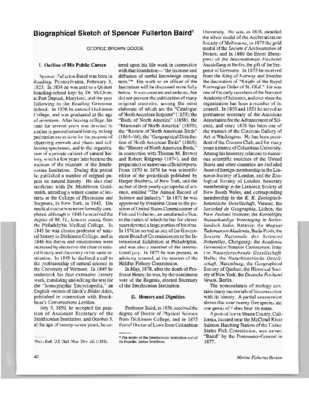 Spencer Fullerton Baird was born in Reading, Pennsylvania, February 3, 1823. In 1834 he was sent to a Quaker boarding-school kept by Dr. McGraw, at Port Deposit, Maryland, and the year following to the Reading Grammar School. In 1836 he entered Dickinson College, and was graduated at the age of seventeen. After leaving college, his time for several years was devoted to studies in general natural history, to long pedestrian excursions for the purpose of observing animals and plants and collecting specimens, and to the organization of a private cabinet of natural history, which a few years later became the nucleus of the museum of the Smithsonian Institution. During this period he published a number of original papers on natural history. He also read medicine with Dr. Middleton Goldsmith, attending a winter course of lectures at the College of Physicians and Surgeons, in New York, in 1842. His medical course was never formally completed, although in 1848 he received the degree of M. D., honoris causa, from the Philadelphia Medical College. In 1845 he was chosen professor of natural history in Dickinson College, and in 1846 his duties and emoluments were increased by election to the chair of natural history and chemistry in the same institution. In 1848 he declined a call to the professorship of natural science in the University of Vermont. In 1849 he undertook his first extensive literary work, translating and editing the text for the "Iconographic Encyclopedia," an English version of Heck's Bilder Atlas, published in connection with Brockhaus's Conversations Lexikon