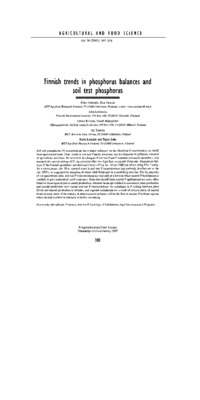 Soil test phosphorus (P) concentration has a major influence on the dissolved P concentration in runoff from agricultural soils. Thus, trends in soil test P partly determine the development of pollution potential of agricultural activities. We reviewed the changes of soil test P and P balances in Finnish agriculture, and assessed the current setting of P loss potential after two Agri-Environmental Programs. Phosphorus balance of the Finnish agriculture has decreased from +35 kg ha–1 of the 1980’s to about +8 kg P ha–1 today. As a consequence, the 50-yr upward trend in soil test P concentrations has probably levelled out in the late 1990’s, as suggested by sampling of about 1600 fields and by a modelling exercise. For the majority of our agricultural soils, soil test P concentrations are currently at a level at which annual P fertilization is unlikely to give measurable yield responses. Soils that benefit from annual P applications are more often found in farms specialized in cereal production, whereas farms specialized in non-cereal plant production and animal production have higher soil test P concentrations. An imbalance in P cycling between plant (feed) and animal production is obvious, and regional imbalances are a result of concentration of animal farms in some parts of the country. A major concern in future will be the fate of manure P in those regions where animal production intensity is further increasing