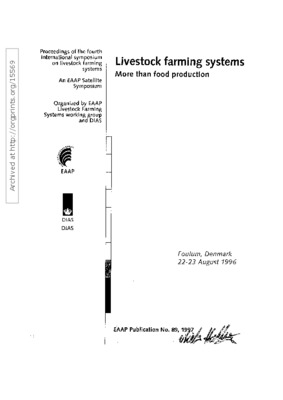 A systems approach for assessing sustainability in livestock farms

The concept of sustainability is widely used in agriculture. There i, however, a large variability in the interpretation of the meaning of sustainability. The broad understanding in conjunction with the complexity of livestock farming calls for a systems approach. In this paper different interpretation of sustainable agriculture id described and discussed. It is concluded that sustainable agriculture has a major normative dimension and obviously has different meanings for different groups in society. Using sustainability in a system describing concept, one has to be very aware of the normative dimension. With a starting point in farm models previously described in this journal a model is introduced where the farm is shown in the centre and put into perspective with other groups in the whole society. The other group represents different perceptions of sustainable agriculture. These perceptions might be in conflict with each other and/or with the observed farm. The idea is then to analyse and forecast in which direction the dominant perception of sustainability will be moving. It is suggested that this can be analysed be means of the discourse concept, which come from social science. A key point in the model is that the farm is considered as a learning human activity system where the farmer reconsiders or reflects his current management in the light of the change in society. In Denmark the dominant perception of agricultural sustainability has changed towards the environmental issues during the last 20 years. As a consequence of this change different indicators have been developed for the purpose of describing and stimulating self reflection concerning environmental issues at farm level. These environmental indicators are presented and discussed through examples. Finally, an approach including a variety of productions systems (i.e. both conventional and organic farming systems) in conjunction with researchers from a variety of disciplines is described