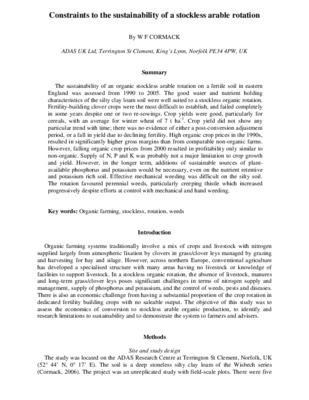 Constraints to the sustainability of a stockless arable rotation

The sustainability of an organic stockless arable rotation on a fertile soil in eastern England was assessed from 1990 to 2005. The good water and nutrient holding characteristics of the silty clay loam soil were well suited to a stockless organic rotation. Fertility-building clover crops were the most difficult to establish, and failed completely in some years despite one or two re-sowings. Crop yields were good, particularly for cereals, with an average for winter wheat of 7 t ha-1. Crop yield did not show any particular trend with time; there was no evidence of either a post conversion adjustment period, or a fall in yield due to declining fertility. High organic crop prices in the 1990s, resulted in significantly higher gross margins than from comparable non-organic farms. However, falling organic crop prices from 2000 resulted in profitability only similar to non-organic. Supply of N, P and K was probably not a major limitation to crop growth and yield. However, in the longer term, additions of sustainable sources of plant-available phosphorus and potassium would be necessary, even on the nutrient retentive and potassium rich soil. Effective mechanical weeding was difficult on the silty soil. The rotation favoured perennial weeds, particularly creeping thistle which increased progressively despite efforts at control with mechanical and hand weeding