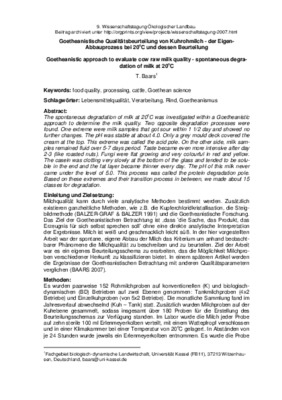 The spontaneous degradation of milk at 20oC was investigated within a Goetheanistic approach to determine the milk quality. Two opposite degradation processes were found. One extreme were milk samples that got sour within 1 1/2 day and showed no further changes. The pH was stable at about 4.0. Only a grey mould deck covered the cream at the top. This extreme was called the acid pole. On the other side, milk sam-ples remained fluid over 5-7 days period. Taste became even more intensive after day 2-3 (like roasted nuts). Fungi were flat growing and very colourful in red and yellow. The casein was clotting very slowly at the bottom of the glass and tended to be solu-ble in the end and the fat layer became thinner every day. The pH of this milk never came under the level of 5.0. This process was called the protein degradation pole. Based on these extremes and their transition process in between, we made about 15 classes for degradation