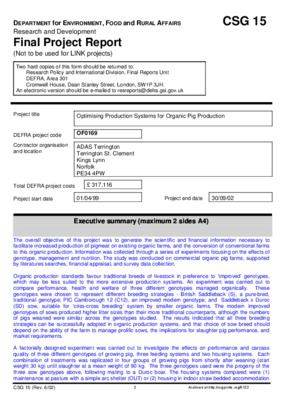 This is the final report of Defra project OF0169. There is a more comprehensive Executive Summary at the start of the attached main report. The overall objective of this project was to generate the scientific and financial information necessary to facilitate increased production of pigmeat on existing organic farms, and the conversion of conventional farms to this organic production. Information was collected through a series of experiments focusing on the effects of genotype, management and nutrition. The study was conducted on commercial organic pig farms, supported by literature searches, financial appraisal, and survey data collection. Organic production standards favour traditional breeds of livestock in preference to ‘improved’ genotypes, which may be less suited to the more extensive production systems. An experiment was carried out to compare performance, health and welfare of three different genotypes managed organically. These genotypes were chosen to represent different breeding strategies - British Saddleback (S), a pure-bred, traditional genotype; PIC Camborough 12 (C12), an improved modern genotype; and Saddleback x Duroc (SD) sow, suitable for ‘criss-cross breeding’ system by smaller organic farms. The modern improved genotypes of sows produced higher litter sizes than their more traditional counterparts, although the numbers of pigs weaned were similar across the genotypes studied. The results indicated that all three breeding strategies can be successfully adopted in organic production systems, and that choice of sow breed should depend on the ability of the farm to manage prolific sows, the implications for slaughter pig performance, and market requirements. A factorially designed experiment was carried out to investigate the effects on performance and carcass quality of three different genotypes of growing pig, three feeding systems and two housing systems. Overall, there were few significant treatment effects on product quality. In a further experiment, the herbage intake of growing pigs maintained at pasture was quantified. The results showed that, when offered a cereal- based concentrate ad libitum, the herbage intake of growing pigs from a good quality grass/clover sward contributed <5% to daily organic matter consumption. In these circumstances, modification of concentrate composition would not be appropriate. To facilitate efficient feed use in organic pig production, a ‘Feed Handbook’ (publication C3) was compiled, printed and made available to UK organic farmers. The effect of paddock management on the ranging behaviour of sows was also studied in a two by three factorial design, involving three sow genotypes. Two commercially applicable paddock management strategies were established: a) ‘Rotational’ (R) where a group of up to 6 sows was relocated to clean ground every four months, and b) ‘Set stocked’ (SS) where a group of up to 6 sows was relocated to clean ground every twelve months. Results suggest that during wet periods, the R paddocks may be advantageous as the pigs are moved off damaged pasture, whereas in drier periods, the SS paddocks maintain grass cover for longer than R and therefore incur less labour for moving without significant pollution risk. Pigs in the SS paddocks do use the further portions of the field, but this may require management manipulations to achieve satisfactory grass usage and distribution of excreted nutrients. In a survey conducted between August 1999 and April 2002 on the commercial organic farms, the main welfare issues reported related to keeping stock clean and dry in periods of high rainfall, managing Porcine Dermatitis and Nephropathy Syndrome and Postweaning Multisystemic Wasting Syndrome (PDNS/PMWS) within their herd, and recruiting and retaining good quality personnel. Mange and lice were the highest-ranking current health concerns, and post-mortem reports of endo-parasitism was the highest-ranking historical health concern. Two of the five farms surveyed reported problems with scouring in young pigs probably due to Coccidia, which may pose a significant risk in organic systems. Data collected on physical performance, capital investment and operating costs were used to establish bench-mark production levels for organic pig herds, the cashflow implications of establishing an organic pig herd, profitability, and sensitivity to movements in productivity, costs and prices. This showed the potential for profitability, which was vulnerable to price fluctuations. Information was disseminated widely through farmer conferences and talks at national conferences, scientific papers, conference proceedings, technical and press reports