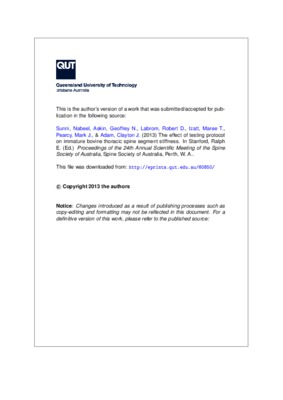 Introduction. In vitro spine biomechanical testing has been central to many advances in understanding the physiology and pathology of the human spine. Owing to the difficulty in obtaining sufficient numbers of human samples to conduct these studies, animal spines have been accepted as a substitute model. However, it is difficult to compare results from different studies, as they use different preparation, testing and data collection methods. The aim of this study was to identify the effect of repeated cyclic loading on bovine spine segment stiffness. It also aimed to quantify the effect of multiple freeze-thaw sequences, as many tests would be difficult to complete in a single session [1-3]. Materials and Methods. Thoracic spines from 6-8 week old calves were used. Each spine was dissected and divided into motion segments including levels T4-T11 (n=28). These were divided into two equal groups. Each segment was potted in polymethylemethacrylate. An Instron Biaxial materials testing machine with a custom made jig was used for testing. The segments were tested in flexion/extension, lateral bending and axial rotation at 37 degrees C and 100% humidity, using moment control to a maximum plus/minus 1.75 Nm with a loading rate of 0.3 Nm per second. Group (A) were tested with continuous repeated cyclic loading for 500 cycles with data recorded at cycles 3, 5, 10, 25, 100, 200, 300, 400 and 500. Group (B) were tested with 10 load cycles after each of 5 freeze thaw sequences. Data was collected from the tenth load cycle after each sequence. Statistical analysis of the data was performed using paired samples t-tests, ANOVA and generalized estimating equations. Results. The data were confirmed as having a normal distribution. 1. There were significant reductions in mean stiffness in flexion/extension (-20%; P=0.001) and lateral bending (-17%; P=0.009) over the 500 load cycles. However, there was no statistically significant change in axial rotation (P=0.152) 2. There was no statistically significant difference between mean stiffness over the five freeze-thaw sequences in flexion/extension (p=0.879) and axial rotation (p=0.07). However, there was a significant reduction in stiffness in lateral bending (-26%; p=0.007) Conclusion. Biomechanical testing of immature bovine spine motion segments requires careful interpretation. The effect of the number of load cycles as well as the number of freeze-thaw cycles on the stiffness of the motion segments depends on the axis of main movement