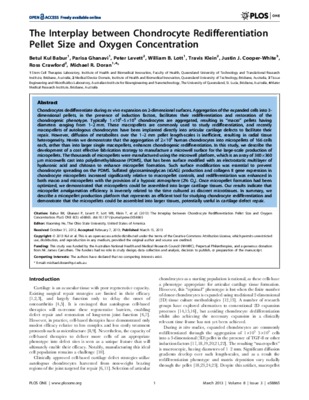 The interplay between chondrocyte redifferentiation pellet size and oxygen concentration

Chondrocytes dedifferentiate during ex vivo expansion on 2-dimensional surfaces. Aggregation of the expanded cells into 3-dimensional pellets, in the presence of induction factors, facilitates their redifferentiation and restoration of the chondrogenic phenotype. Typically 1×10<sup>5</sup>–5×10<sup>5</sup> chondrocytes are aggregated, resulting in “macro” pellets having diameters ranging from 1–2 mm. These macropellets are commonly used to study redifferentiation, and recently macropellets of autologous chondrocytes have been implanted directly into articular cartilage defects to facilitate their repair. However, diffusion of metabolites over the 1–2 mm pellet length-scales is inefficient, resulting in radial tissue heterogeneity. Herein we demonstrate that the aggregation of 2×10<sup>5</sup> human chondrocytes into micropellets of 166 cells each, rather than into larger single macropellets, enhances chondrogenic redifferentiation. In this study, we describe the development of a cost effective fabrication strategy to manufacture a microwell surface for the large-scale production of micropellets. The thousands of micropellets were manufactured using the microwell platform, which is an array of 360×360 µm microwells cast into <i>polydimethylsiloxane</i> (PDMS), that has been surface modified with an electrostatic multilayer of hyaluronic acid and chitosan to enhance micropellet formation. Such surface modification was essential to prevent chondrocyte spreading on the PDMS. Sulfated glycosaminoglycan (sGAG) production and collagen II gene expression in chondrocyte micropellets increased significantly relative to macropellet controls, and redifferentiation was enhanced in both macro and micropellets with the provision of a hypoxic atmosphere (2% O<sub>2</sub>). Once micropellet formation had been optimized, we demonstrated that micropellets could be assembled into larger cartilage tissues. Our results indicate that micropellet amalgamation efficiency is inversely related to the time cultured as discreet microtissues. In summary, we describe a micropellet production platform that represents an efficient tool for studying chondrocyte redifferentiation and demonstrate that the micropellets could be assembled into larger tissues, potentially useful in cartilage defect repair