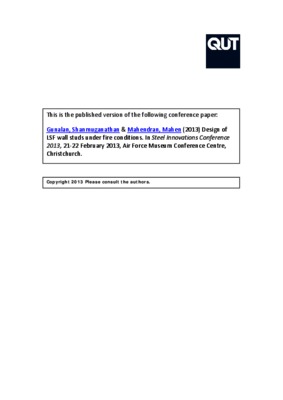 By Shanmuganathan Gunalan and Mahen Mahendran
Get PDF (589 KB)

Cold-formed steel lipped channels are commonly used in LSF wall construction as load bearing studs with plasterboards on both sides. Under fire conditions, cold-formed thin-walled steel sections heat up quickly resulting in fast reduction in their strength and stiffness. Usually the LSF wall panels are subjected to fire from one side which will cause thermal bowing, neutral axis shift and magnification effects due to the development of non-uniform temperature distributions across the stud. This will induce an additional bending moment in the stud and hence the studs in LSF wall panels should be designed as a beam column considering both the applied axial compression load and the additional bending moment. Traditionally the fire resistance rating of these wall panels is based on approximate prescriptive methods. Very often they are limited to standard wall configurations used by the industry. Therefore a detailed research study is needed to develop fire design rules to predict the failure load and hence the failure time of LSF wall panels subject to non-uniform temperature distributions. This paper presents the details of an investigation to develop suitable fire design rules for LSF wall studs under non-uniform elevated temperature distributions. Applications of the previously developed fire design rules based on AISI design manual and Eurocode 3 Parts 1.2 and 1.3 to LSF wall studs were investigated in detail and new simplified fire design rules based on AS/NZS 4600 and Eurocode 3 Part 1.3 were proposed in the current study with suitable allowances for the interaction effects of compression and bending actions. The accuracy of the proposed fire design rules was verified by using the results from full scale fire tests and extensive numerical studies