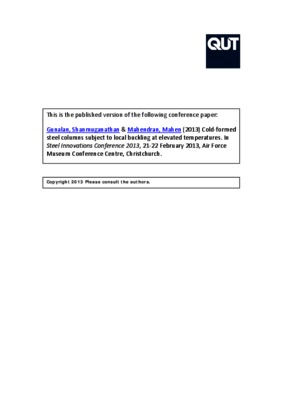 By Shanmuganathan Gunalan and Mahen Mahendran
Get PDF (682 KB)

Fire safety design of building structures has received greater attention in recent times due to continuing losses of properties and lives in fires. However, the structural behaviour of thin-walled cold-formed steel columns under fire conditions is not well understood despite the increasing use of light gauge steels in building construction. Cold-formed steel columns are often subject to local buckling effects. Therefore a series of laboratory tests of lipped and unlipped channel columns made of varying steel thicknesses and grades was undertaken at uniform elevated temperatures up to 700°C under steady state conditions. Finite element models of the tested columns were also developed, and their elastic buckling and nonlinear analysis results were compared with test results at elevated temperatures. Effects of the degradation of mechanical properties of steel with temperature were included in the finite element analyses. The use of accurately measured yield stress, elasticity modulus and stress-strain curves at elevated temperatures provided a good comparison of the ultimate loads and load-deflection curves from tests and finite element analyses. The commonly used effective width design rules and the direct strength method at ambient temperature were then used to predict the ultimate loads at elevated temperatures by using the reduced mechanical properties. By comparing these predicted ultimate loads with those from tests and finite element analyses, the accuracy of using this design approach was evaluated