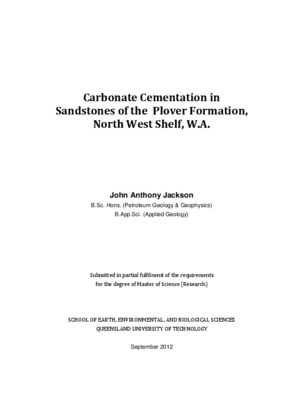 Ancient sandstones include important reservoirs for hydrocarbons (oil and gas), but, in many cases, their ability to serve as reservoirs is heavily constrained by the effects of carbonate cements on porosity and permeability. This study investigated the controls on distribution and abundance of carbonate cements within the Jurassic Plover Formation, Browse Basin, North West Shelf, Australia. Samples were analysed petrographically with point counting of 59 thin sections and mineralogically with x-ray diffraction from two wells within the Torosa Gas Field. Selected samples were also analysed for stable isotopes of O and C. Sandstones are classified into eleven groups. Most abundant are quartzarenites and then calcareous quartzarenites. Lithology ranged between sandstones consisting of mostly quartz with scant or no carbonate in the form of cement or allochems, to sandstones with as much as 40% carbonate. The major sources of carbonate cement in Torosa 1 and Torosa 4 sandstones were found to be early, shallow marine diagenetic processes (including cementation), followed by calcite cementation and recrystallisation of cements and allochems during redistribution by meteoric waters. Blocky and sparry calcite cements, indicative of meteoric environments on the basis of stable isotope values and palaeotemperature assessment, overprinted the initial shallow marine cement phase in all cases and meteoric cements are dominant. Torosa 4 was influenced more by marine settings than Torosa 1, and thus has the greater potential for calcite cement. The relatively low compaction of calcite-cemented sandstones and the stable isotope data suggest deep burial cementation was not a major factor. Insufficient volcanic rock fragments or authigenic clay content infers alteration of feldspars was not a major source of calcite. Very little feldspar is present, altered or otherwise. Hence, increased alkalinity from feldspar dissolution is not a contributing factor in cement formation. Increased alkalinity from bacterial sulphate reduction in organic–rich fine sediments may have driven limited cementation in some samples. The main definable and significant source of diagenetic marine calcite cement originated from original marine cements and the nearby dissolution of biogenic sources (allochems) at relatively shallow depths. Later diagenetic fluids emplaced minor dolomite, but this cement did not greatly affect the reservoir quality in the samples studied