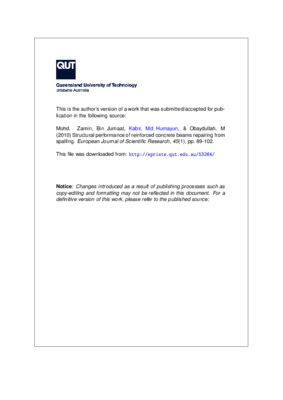 The effectiveness of a repair work for the restoration of spalled reinforced concrete (r.c.) structures depends to a great extent, on their ability to restore the structural integrity of the r.c. element, to restore its serviceability and to protect the reinforcements from further deterioration. This paper presents results of a study concocted to investigate the structural performance of eight spalled r.c. beams repaired using two advanced repair materials in various zones for comparison purposes, namely a free flowing self compacting mortar (FFSCM) and a polymer Modified cementitious mortar (PMCM). The repair technique adopted was that for the repair of spalled concrete in which the bond between the concrete and steel was completely lost due to reinforcement corrosion or the effect of fire or impact. The beams used for the experiment were first cast, then hacked at various zones before they were repaired except for the control beam. The beam specimens were then loaded to failure under four point loadings. The structural response of each beam was evaluated in terms of first crack load, cracking behavior, crack pattern, deflection, variation of strains in the concrete and steel, collapse load and the modes of failure. The results of the test showed that, the repair materials applied on the various zones of the beams were able to restore more than 100% of the beams’ capacity and that FFSCM gave a better overall performance