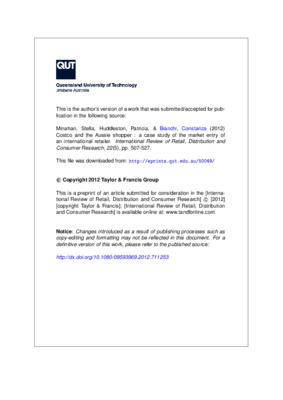 Costco and the Aussie shopper : a case study of the market entry of an international retailer

Retailing is a globalized industry yet retailers must respond to local shopping habits if they are to be perceived as legitimate by the host country customers. However, some retailers may be unable or unwilling to respond to all customer requirements. Costco, the membership warehouse club retailer, has been successful in its international expansion efforts, establishing its first Australian store in Melbourne in 2009. In the first twelve months of operation, the store became one of Costco’s top five stores in the world. We investigate this success focussing on the customer, and use institutional theory to analyze what concessions were made by the customer and the company. Data were collected from consumer interviews, site visits and secondary media and industry sources. Analysis revealed negotiations based on the rejection, acceptance or adaptation of the regulative, normative and cultural cognitive aspects of the Australian shopper and the Costco business model. Customers made concessions to accommodate the new business model, and Costco responded to entrenched Australian shopping habits. This case is the first to explore the outcome of retail internationalization from the customers’ perspective, revealing the concept of mutual concessions. The interaction and subsequent adaptation by both customer and retailer have resulted in the institutionalization of new shopping norms in the host country and success for the international retailer