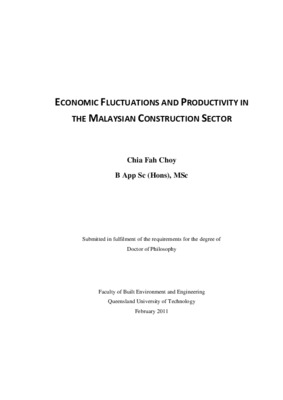 Economic fluctuations and productivity in the Malaysian construction sector

Growth in productivity is the key determinant of the long-term health and prosperity of an economy. The construction industry being one of major strategic importance, its productivity performance has a significant effect on national economic growth. The relationship between construction output and economy has received intensive studies, but there is lack of empirical study on the relationship between construction productivity and economic fluctuations. Fluctuations in construction output are endemic in the industry. In part they are caused by the boom and slump of the economy as a whole and in part by the nature of the construction product. This research aims to uncover how the productivity of construction sector is influenced in the course of economic fluctuations in Malaysia. Malaysia has adopted three economic policies – New Economic Policy (1971-1990), National Development Policy (1991-2000) and the National Vision Policy (2001-2010) since gaining independence in 1959. The Privatisation Master Plan was introduced in 1991. Operating within this historical context, the Malaysian construction sector has experienced four business cycles since 1960. A mixed-method design approach is adopted in this study. Quantitative analysis was conducted on the published official statistics of the construction industry and the overall economy in Malaysia between 1970 and 2009. Qualitative study involved interviews with a purposive sample of 21 industrial participants. This study identified a 32-year long building cycle appears in 1975-2006. It is superimposed with three shorter construction business cycles in 1975-1987, 1987-1999 and 1999-2006. The correlations of Construction labour productivity (CLP) and GDP per capita are statistically significant for the 1975-2006 building cycle, 1987-1999 and 1999-2006 construction business cycles. It was not significant in 1975-1987 construction business cycles. The Construction Industry Surveys/Census over the period from 1996 to 2007 show that the average growth rate of total output per employee expanded but the added value per employee contracted which imply high cost of bought-in materials and services and inefficient usage of purchases. The construction labour productivity is peaked at 2004 although there is contraction of construction sector in 2004. The residential subsector performed relatively better than the other sub-sectors in most of the productivity indicators. Improvements are found in output per employee, value added per employee, labour competitiveness and capital investment but declines are recorded in value added content and capital productivity. The civil engineering construction is most productive in the labour productivity nevertheless relatively poorer in the capital productivity. The labour cost is more competitive in the larger size establishment. The added value per labour cost is higher in larger sized establishment attributed to efficient in utilization of capital. The interview with the industrial participant reveals that the productivity of the construction sector is influenced by the economic environment, the construction methods, contract arrangement, payment chain and regulatory policies. The fluctuations of construction demand have caused companies switched to defensive strategy during the economic downturn and to ensure short-term survival than to make a profit for the long-term survival and growth. It leads the company to take drastic measures to curb expenses, downsizing, employ contract employment, diversification and venture overseas market. There is no empirical evidence supports downsizing as a necessary step in a process of reviving productivity. The productivity does not correlate with size of firm. A relatively smaller and focused firm is more productive than the larger and diversified organisation. However diversified company experienced less fluctuation in both labour and capital productivity. In order to improve the productivity of the construction sector, it is necessary to remove the negatives and flaws from past practices. The recommended measures include long-term strategic planning and coordinated approaches of government agencies in planning of infrastructure development and to provide regulatory environments which encourage competition and facilitate productivity improvement