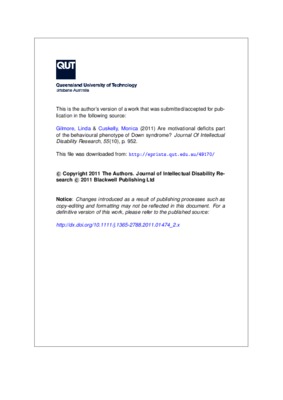 Are motivational deficits part of the behavioural phenotype of Down syndrome?

By Linda Gilmore and Monica Cuskelly
Get PDF (58 KB)

Motivational deficits are generally accepted to be part of the behavioural phenotype associated with Down syndrome (DS). A motivational profile comprising low or inconsistent levels of task persistence, avoidance of challenging activities and over-dependence on adult direction has been described. However, comparisons are usually made between children with DS and those who are developing typically, without the inclusion of samples with intellectual disability (ID) from aetiologies other than DS. Such comparisons are needed to determine the extent to which motivational deficits are specific to DS, as opposed to being a feature of ID generally. Methods: The current study collected data about the personality-motivation profiles of children in three groups matched for mental age. They consisted of 80 typically developing (TD)3–7 year old children, 62 children with DS aged 7–15 years, and 54 children with moderate ID aged 7–15 years. Parents completed the 37-item EZ-Personality Questionnaire (EZPQ; Zigler et al., 2002), a measure of personality-motivational functioning. Results: There were significant differences between TD children and those with ID on all EZPQ scales. In most respects children with DS did not differ significantly from others with moderate ID, although they were rated as having greater expectancy of success and fewer negative reactions. Conclusion: The finding that children with DS are less motivated than TD children of the same mental age is consistent with previous studies in which parents have rated motivation. It seems, however, that motivation difficulties are associated with ID more generally, rather than being specific to those with DS. The study raises questions about phenotypic versus experiential effects on motivation for children with ID