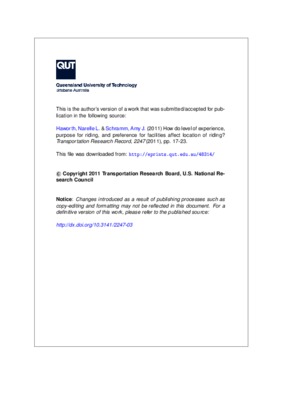 How do level of experience, purpose for riding, and preference for facilities affect location of riding?

Characteristics of the road infrastructure affect both the popularity of bicycling and its safety, but comparisons of the safety performance of infrastructure may be confounded by differences in the profiles of cyclists who use them. Data from a survey of 2,532 adult bicycle riders in Queensland, Australia, demonstrated that many riders rode reluctantly in particular locations and that preference for riding location was influenced by degree of experience and riding purpose. Most riders rode most often and furthest per week on urban roads, but approximately one-third of all riders (and more new riders) rode there reluctantly. Almost two-thirds of riders rode on bicycle paths, most by choice, not reluctantly. New riders rode proportionally more on bicycle paths, but continuing riders rode further in absolute terms. Utilitarian riders were more likely to ride on bicycle paths than social and fitness riders and almost all of this riding was by choice. Fitness riders were more reluctant in their use of bicycle paths, but still most of their use was by choice. One-third of the respondents reported riding on the sidewalk (legal in Queensland), with approximately two-thirds doing so reluctantly. The frequency and distance ridden on the sidewalk was less than for urban roads and bicycle paths. Sidewalks and bicycle paths were important facilities for both inexperienced and experienced riders and for utilitarian riding, especially when urban roads were considered a poor choice for cycling