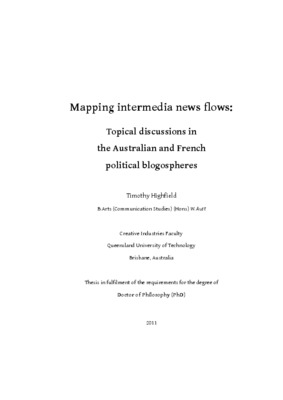 The growth of technologies and tools branded as =new media‘ or =Web 2.0‘ has sparked much discussion about the internet and its place in all facets of social life. Such debate includes the potential for blogs and citizen journalism projects to replace or alter journalism and mainstream media practices. However, while the journalism-blog dynamic has attracted the most attention, the actual work of political bloggers, the roles they play in the mediasphere and the resources they use, has been comparatively ignored. This project will look at political blogging in Australia and France - sites commenting on or promoting political events and ideas, and run by citizens, politicians, and journalists alike. In doing so, the structure of networks formed by bloggers and the nature of communication within political blogospheres will be examined. Previous studies of political blogging around the world have focussed on individual nations, finding that in some cases the networks are divided between different political ideologies. By comparing two countries with different political representation (two-party dominated system vs. a wider political spectrum), this study will determine the structure of these political blogospheres, and correlate these structures with the political environment in which they are situated. The thesis adapts concepts from communication and media theories, including framing, agenda setting, and opinion leaders, to examine the work of political bloggers and their place within the mediasphere. As well as developing a hybrid theoretical base for research into blogs and other online communication, the project outlines new methodologies for carrying out studies of online activity through the analysis of several topical networks within the wider activity collected for this project. The project draws on hyperlink and textual data collected from a sample of Australian and French blogs between January and August 2009. From this data, the thesis provides an overview of =everyday‘ political blogging, showing posting patterns over several months of activity, away from national elections and their associated campaigns. However, while other work in this field has looked solely at cumulative networks, treating collected data as a static network, this project will also look at specific cases to see how the blogospheres change with time and topics of discussion. Three case studies are used within the thesis to examine how blogs cover politics, featuring an international political event (the Obama inauguration), and local political topics (the opposition to the =Création et Internet‘, or HADOPI, law in France, the =Utegate‘ scandal in Australia). By using a mixture of qualitative and quantitative methods, the study analyses data collected from a population of sites from both countries, looking at their linking patterns, relationship with mainstream media, and topics of interest. This project will subsequently help to further develop methodologies in this field and provide new and detailed information on both online networks and internet-based political communication in Australia and France