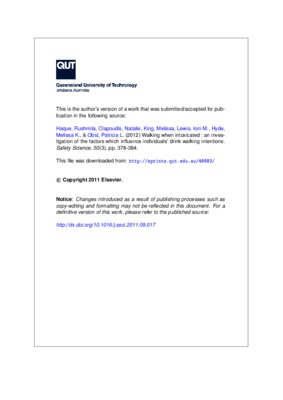 Walking when intoxicated : an investigation of the factors which influence individuals' drink walking intentions

Annually, in Australia, 10-15% of all road-related fatalities involve pedestrians. Of those pedestrians fatally injured, approximately 45% were walking while intoxicated or 'drink walking'. Drink walking is increasing in prevalence and younger persons may be especially prone to engage in this behaviour and, thus, are at heightened risk of being injured or killed. Presently, limited research is available regarding the factors which influence individuals to drink walk. This study explored young people's (17-25 years) intentions to drink walk, using an extended Theory of Planned Behaviour (TPB). Participants (N = 215), completed a self-report questionnaire which assessed the standard TPB constructs (attitude, subjective norm, perceived behavioural control) as well as the extended constructs of risk perception, anticipated regret, and past behaviour. It was hypothesised that the standard TPB constructs would significantly predict individuals' reported intentions to drink walk and that the additional constructs would predict intentions over and above the TPB constructs. The TPB variables significantly predicted 63.2% of the variance in individuals' reported intentions to drink walk, and the additional variables, combined, explained a further 6.1% of the variance. Of the additional constructs, anticipated regret and past behaviour, but not risk perception, were significant predictors of drink walking intentions. As one of the first studies to provide a theoretically-based investigation of factors influencing individuals' drink walking intentions, the current study's findings have potentially significant implications for understanding young people's decisions to drink walk and the design of future countermeasures to ultimately reduce this behaviour