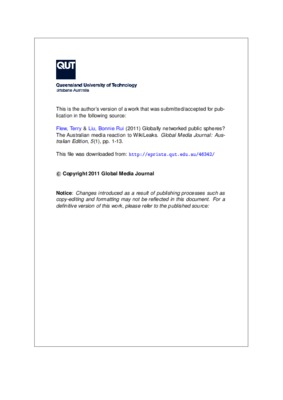 The global release of 250,000 US Embassy diplomatic cables to selected media sites worldwide through the WikiLeaks website, was arguably the major global media event of 2010. As well as the implications of the content of the cables for international politics and diplomacy, the actions of WikiLeaks and its controversial editor-in-chief, the Australian Julian Assange, bring together a range of arguments about how the media, news and journalism are being transformed in the 21st century. This paper will focus on the reactions of Australian online news media sites to the release of the diplomatic cables by WikiLeaks, including both the online sites of established news outlets such as The Australian, Sydney Morning Herald and The Age, the ABC’s The Drum site, and online-only sites such as Crikey, New Matilda and On Line Opinion. The study focuses on opinion and commentary rather than straight news reportage, and analysis is framed around three issues: WikiLeaks and international diplomacy; implications of WikiLeaks for journalism; and WikiLeaks and democracy, including debates about the organisation and the ethics of its own practice. It also whether a “WikiLeaks Effect” has wider implications for how journalism is conducted in the future, particularly the method of ‘redaction’ of large amounts of computational data