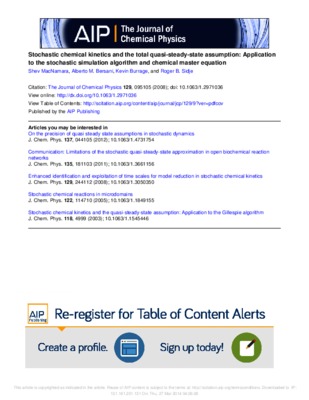 Recently the application of the quasi-steady-state approximation (QSSA) to the stochastic simulation algorithm (SSA) was suggested for the purpose of speeding up stochastic simulations of chemical systems that involve both relatively fast and slow chemical reactions [Rao and Arkin, J. Chem. Phys. 118, 4999 (2003)] and further work has led to the nested and slow-scale SSA. Improved numerical efficiency is obtained by respecting the vastly different time scales characterizing the system and then by advancing only the slow reactions exactly, based on a suitable approximation to the fast reactions. We considerably extend these works by applying the QSSA to numerical methods for the direct solution of the chemical master equation (CME) and, in particular, to the finite state projection algorithm [Munsky and Khammash, J. Chem. Phys. 124, 044104 (2006)], in conjunction with Krylov methods. In addition, we point out some important connections to the literature on the (deterministic) total QSSA (tQSSA) and place the stochastic analogue of the QSSA within the more general framework of aggregation of Markov processes. We demonstrate the new methods on four examples: Michaelis–Menten enzyme kinetics, double phosphorylation, the Goldbeter–Koshland switch, and the mitogen activated protein kinase cascade. Overall, we report dramatic improvements by applying the tQSSA to the CME solver