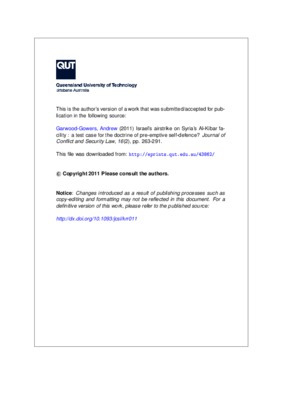 Israel's airstrike on Syria's Al-Kibar facility : a test case for the doctrine of pre-emptive self-defence?

By Andrew Garwood-Gowers
Get PDF (346 KB)

This article analyses the legality of Israel’s 2007 airstrike on an alleged Syrian nuclear facility at Al-Kibar—an incident that has been largely overlooked by international lawyers to date. The absence of a threat of imminent attack from Syria means Israel’s military action was not a lawful exercise of anticipatory self-defence. Yet, despite Israel’s clear violation of the prohibition on the use of force there was remarkably little condemnation from other states, suggesting the possibility of growing international support for the doctrine of pre-emptive self-defence. This article argues that the muted international reaction to Israel’s pre-emptive action was the result of political factors, and should not be seen as endorsement of the legality of the airstrike. As such, a lack of opinio juris means the Al-Kibar episode cannot be viewed as extending the scope of the customary international law right of self-defence so as to permit the use of force against non-imminent threats. However, two features of this incident—namely, Israel’s failure to offer any legal justification for its airstrike, and the international community’s apparent lack of concern over legality—are also evident in other recent uses of force in the ‘war on terror’ context. These developments may indicate a shift in state practice involving a downgrading of the role of international law in discussions of the use of force. This may signal a declining perception of the legitimacy of the jus ad bellum, at least in cases involving minor uses of force