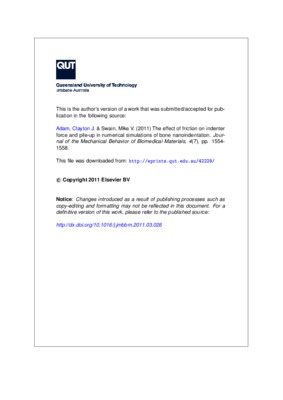 Nanoindentation is a useful technique for probing the mechanical properties of bone, and finite element (FE) modeling of the indentation allows inverse determination of elasto-plastic constitutive properties. However, all but one FE study to date have assumed frictionless contact between indenter and bone. The aim of this study was to explore the effect of friction in simulations of bone nanoindentation. Two dimensional axisymmetric FE simulations were performed using a spheroconical indenter of tip radius 0.6 m and angle 90°. The coefficient of friction between indenter and bone was varied between 0.0 (frictionless) and 0.3. Isotropic linear elasticity was used in all simulations, with bone elastic modulus E=13.56GPa and Poisson‟s ratio f 0.3. Plasticity was incorporated using both Drucker-Prager and von Mises yield surfaces. Friction had a modest effect on the predicted force-indentation curve for both von Mises and Drucker-Prager plasticity, reducing maximum indenter displacement by 10% and 20% respectively as friction coefficient was increased from zero to 0.3 (at a maximum indenter force of 5mN). However, friction has a much greater effect on predicted pile-up after indentation, reducing predicted pile-up from 0.27 to 0.11 m with a von Mises model, and from 0.09 to 0.02 m with Drucker-Prager plasticity. We conclude that it is potentially important to include friction in nanoindentation simulations of bone if pile-up is used to compare simulation results with experiment