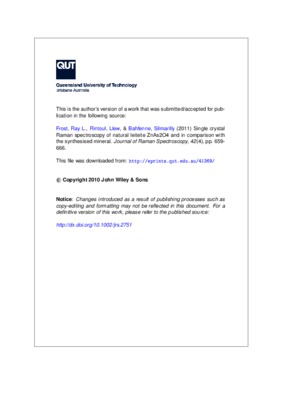 The oriented single crystal Raman spectrum of leiteite has been obtained and the spectra related to the structure of the mineral. The intensities of the observed bands vary according to orientation allowing them to be assigned to either Ag or Bg modes. Ag bands are generally the most intense in the CAAC spectrum, followed by ACCA, CBBC, and ABBA whereas Bg bands are generally the most intense in the CBAC followed by ABCA. The CAAC and ACCA spectra are identical, as are those obtained in the CBBC and ABBA orientations. Both cross-polarised spectra are identical. Band assignments were made with respect to bridging and non-bridging As-O bonds