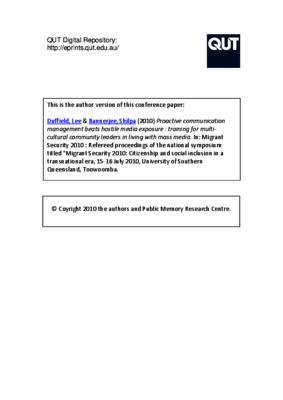 By Lee Duffield and Shilpa Bannerjee
Get PDF (321 KB)

Proactive communication management instead of mortification in the glare of hostile media attention became the theme of a four-day training program for multi-cultural community leaders, the object of this research. The program in Brisbane from December 2009 through to February this year was conducted under auspices of a Community Media Link grant program shared by Griffith University and the Queensland Ethnic Communities Council, together with Journalism academics from the Queensland University of Technology. Twenty-eight participants from 23 organisations took part, with a team of nine facilitators from the host organisations, and guest presenters from the news media. This paper reviews the process, taking into account: its objectives, to empower participants by showing how Australian media operate and introducing participants to journalists; pedagogical thrust, where overview talks, with role play seminars with guest presenters from the media, were combined with practice in interviews and writing for media; and outcomes, assessed on the basis of participants’ responses. The research methodology is qualitative, in that the study is based on discussions to review the planning and experience of sessions, and anonymous, informal feed-back questionnaires distributed to the participants. Background literature on multiculturalism and community media was referred to in the study. The findings indicate positive outcomes for participants from this approach to protection of persons unversed in living in the Australian “mediatised” environment. Most affirmed that the “production side” perspective of the exercise had informed and motivated them effectively, such that henceforth they would venture far more into media management, in their community leadership roles