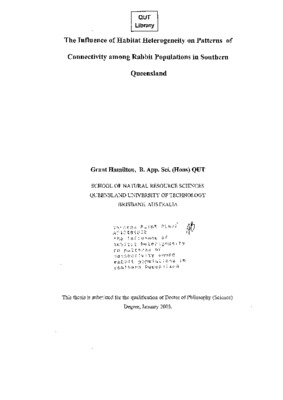 Patterns of connectivity among local populations influence the dynamics of regional systems, but most ecological models have concentrated on explaining the effect of connectivity on local population structure using dynamic processes covering short spatial and temporal scales. In this study, a model was developed in an extended spatial system to examine the hypothesis that long term connectivity levels among local populations are influenced by the spatial distribution of resources and other habitat factors. The habitat heterogeneity model was applied to local wild rabbit populations in the semi-arid Mitchell region of southern central Queensland (the Eastern system). Species' specific population parameters which were appropriate for the rabbit in this region were used. The model predicted a wide range of long term connectivity levels among sites, ranging from the extreme isolation of some sites to relatively high interaction probabilities for others. The validity of model assumptions was assessed by regressing model output against independent population genetic data, and explained over 80% of the variation in the highly structured genetic data set. Furthermore, the model was robust, explaining a significant proportion of the variation in the genetic data over a wide range of parameters. The performance of the habitat heterogeneity model was further assessed by simulating the widely reported recent range expansion of the wild rabbit into the Mitchell region from the adjacent, panmictic Western rabbit population system. The model explained well the independently determined genetic characteristics of the Eastern system at different hierarchic levels, from site specific differences (for example, fixation of a single allele in the population at one site), to differences between population systems (absence of an allele in the Eastern system which is present in all Western system sites). The model therefore explained the past and long term processes which have led to the formation and maintenance of the highly structured Eastern rabbit population system. Most animals exhibit sex biased dispersal which may influence long term connectivity levels among local populations, and thus the dynamics of regional systems. When appropriate sex specific dispersal characteristics were used, the habitat heterogeneity model predicted substantially different interaction patterns between female-only and combined male and female dispersal scenarios. In the latter case, model output was validated using data from a bi-parentally inherited genetic marker. Again, the model explained over 80% of the variation in the genetic data. The fact that such a large proportion of variability is explained in two genetic data sets provides very good evidence that habitat heterogeneity influences long term connectivity levels among local rabbit populations in the Mitchell region for both males and females. The habitat heterogeneity model thus provides a powerful approach for understanding the large scale processes that shape regional population systems in general. Therefore the model has the potential to be useful as a tool to aid in the management of those systems, whether it be for pest management or conservation purposes