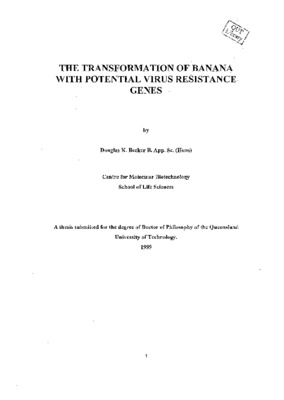 The transformation of banana with potential virus resistance genes

One approach to reducing the yield losses caused by banana viral diseases is the use of genetic engineering and pathogen-derived resistance strategies to generate resistant cultivars. The development of transgenic virus resistance requires an efficient banana transformation method, particularly for commercially important 'Cavendish' type cultivars such as 'Grand Nain'. Prior to this study, only two examples of the stable transformation of banana had been reported, both of which demonstrated the principle of transformation but did not characterise transgenic plants in terms of the efficiency at which individual transgenic lines were generated, relative activities of promoters in stably transformed plants, and the stability of transgene expression. The aim of this study was to develop more efficient transformation methods for banana, assess the activity of some commonly used and also novel promoters in stably transformed plants, and transform banana with genes that could potentially confer resistance to banana bunchy top nanovirus (BBTV) and banana bract mosaic potyvirus (BBrMV). A regeneration system using immature male flowers as the explant was established. The frequency of somatic embryogenesis in male flower explants was influenced by the season in which the inflorescences were harvested. Further, the media requirements of various banana cultivars in respect to the 2,4-D concentration in the initiation media also differed. Following the optimisation of these and other parameters, embryogenic cell suspensions of several banana (Musa spp.) cultivars including 'Grand Nain' (AAA), 'Williams' (AAA), 'SH-3362' (AA), 'Goldfinger' (AAAB) and 'Bluggoe' (ABB) were successfully generated. Highly efficient transformation methods were developed for both 'Bluggoe' and 'Grand Nain'; this is the first report of microprojectile bombardment transformation of the commercially important 'Grand Nain' cultivar. Following bombardment of embryogenic suspension cells, regeneration was monitored from single transfom1ed cells to whole plants using a reporter gene encoding the green fluorescent protein (gfp). Selection with kanamycin enabled the regeneration of a greater number of plants than with geneticin, while still preventing the regeneration of non-transformed plants. Southern hybridisation confirmed the neomycin phosphotransferase gene (npt II) was stably integrated into the banana genome and that multiple transgenic lines were derived from single bombardments. The activity, stability and tissue specificity of the cauliflower mosaic virus 358 (CaMV 35S) and maize polyubiquitin-1 (Ubi-1) promoters were examined. In stably transformed banana, the Ubi-1 promoter provided approximately six-fold higher p-glucuronidase (GUS) activity than the CaMV 35S promoter, and both promoters remained active in glasshouse grown plants for the six months they were observed. The intergenic regions ofBBTV DNA-I to -6 were isolated and fused to either the uidA (GUS) or gfjJ reporter genes to assess their promoter activities. BBTV promoter activity was detected in banana embryogenic cells using the gfp reporter gene. Promoters derived from BBTV DNA-4 and -5 generated the highest levels of transient activity, which were greater than that generated by the maize Ubi-1 promoter. In transgenic banana plants, the activity of the BBTV DNA-6 promoter (BT6.1) was restricted to the phloem of leaves and roots, stomata and root meristems. The activity of the BT6.1 promoter was enhanced by the inclusion of intron-containing fragments derived from the maize Ubi-1, rice Act-1, and sugarcane rbcS 5' untranslated regions in GUS reporter gene constructs. In transient assays in banana, the rice Act-1 and maize Ubi-1 introns provided the most significant enhancement, increasing expression levels 300-fold and 100-fold, respectively. The sugarcane rbcS intron increased expression about 10-fold. In stably transformed banana plants, the maize Ubi-1 intron enhanced BT6.1 promoter activity to levels similar to that of the CaMV 35S promoter, but did not appear to alter the tissue specificity of the promoter. Both 'Grand Nain' and 'Bluggoe' were transformed with constructs that could potentially confer resistance to BBTV and BBrMV, including constructs containing BBTV DNA-1 major and internal genes, BBTV DNA-5 gene, and the BBrMV coat protein-coding region all under the control of the Ubi-1 promoter, while the BT6 promoter was used to drive the npt II selectable marker gene. At least 30 transgenic lines containing each construct were identified and replicates of each line are currently being generated by micropropagation in preparation for virus challenge