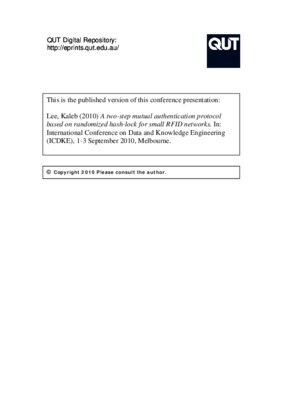 RFID has been widely used in today's commercial and supply chain industry, due to the significant advantages it offers and the relatively low production cost. However, this ubiquitous technology has inherent problems in security and privacy. This calls for the development of simple, efficient and cost effective mechanisms against a variety of security threats. This paper proposes a two-step authentication protocol based on the randomized hash-lock scheme proposed by S. Weis in 2003. By introducing additional measures during the authentication process, this new protocol proves to enhance the security of RFID significantly, and protects the passive tags from almost all major attacks, including tag cloning, replay, full-disclosure, tracking, and eavesdropping. Furthermore, no significant changes to the tags is required to implement this protocol, and the low complexity level of the randomized hash-lock algorithm is retained