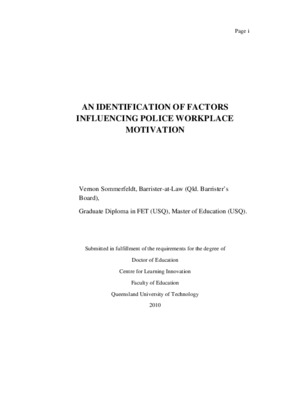 By Vernon Sommerfeldt
Get PDF (2 MB)

Police work tasks are diverse and require the ability to take command, demonstrate leadership, make serious decisions and be self directed (Beck, 1999; Brunetto & Farr-Wharton, 2002; Howard, Donofrio & Boles, 2002). This work is usually performed in pairs or sometimes by an officer working alone. Operational police work is seldom performed under the watchful eyes of a supervisor and a great amount of reliance is placed on the high levels of motivation and professionalism of individual officers. Research has shown that highly motivated workers produce better outcomes (Whisenand & Rush, 1998; Herzberg, 2003). It is therefore important that Queensland police officers are highly motivated to provide a quality service to the Queensland community. This research aims to identify factors which motivate Queensland police to perform quality work. Researchers acknowledge that there is a lack of research and knowledge in regard to the factors which motivate police (Beck, 1999; Bragg, 1998; Howard, Donofrio & Boles, 2002; McHugh & Verner, 1998). The motivational factors were identified in regard to the demographic variables of; age, sex, rank, tenure and education. The model for this research is Herzberg’s two-factor theory of workplace motivation (1959). Herzberg found that there are two broad types of workplace motivational factors; those driven by a need to prevent loss or harm and those driven by a need to gain personal satisfaction or achievement. His study identified 16 basic sub-factors that operate in the workplace. The research utilised a questionnaire instrument based on the sub-factors identified by Herzberg (1959). The questionnaire format consists of an initial section which sought demographic information about the participant and is followed by 51 Likert scale questions. The instrument is an expanded version of an instrument previously used in doctoral studies to identify sources of police motivation (Holden, 1980; Chiou, 2004). The questionnaire was forwarded to approximately 960 police in the Brisbane, Metropolitan North Region. The data were analysed using Factor Analysis, MANOVAs, ANOVAs and multiple regression analysis to identify the key sources of police motivation and to determine the relationships between demographic variables such as: age, rank, educational level, tenure, generation cohort and motivational factors. A total of 484 officers responded to the questionnaire from the sample population of 960. Factor analysis revealed five broad Prime Motivational Factors that motivate police in their work. The Prime Motivational Factors are: Feeling Valued, Achievement, Workplace Relationships, the Work Itself and Pay and Conditions. The factor Feeling Valued highlighted the importance of positive supportive leaders in motivating officers. Many officers commented that supervisors who only provided negative feedback diminished their sense of feeling valued and were a key source of de-motivation. Officers also frequently commented that they were motivated by operational police work itself whilst demonstrating a strong sense of identity with their team and colleagues. The study showed a general need for acceptance by peers and an idealistic motivation to assist members of the community in need and protect victims of crime. Generational cohorts were not found to exert a significant influence on police motivation. The demographic variable with the single greatest influence on police motivation was tenure. Motivation levels were found to drop dramatically during the first two years of an officer’s service and generally not improve significantly until near retirement age. The findings of this research provide the foundation of a number of recommendations in regard to police retirement, training and work allocation that are aimed to improve police motivation levels. The five Prime Motivational Factor model developed in this study is recommended for use as a planning tool by police leaders to improve motivational and job-satisfaction components of police Service policies. The findings of this study also provide a better understanding of the current sources of police motivation. They are expected to have valuable application for Queensland police human resource management when considering policies and procedures in the areas of motivation, stress reduction and attracting suitable staff to specific areas of responsibility