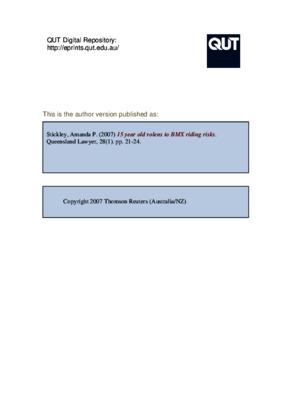 The Queensland Court of Appeal recently heard a case that raised the defence of volenti on fit injuria. By a majority of 2:1 the court held in Leyden v Caboolture Shire Council [2007] QCA 134 (20 April 2007) that the defence of volenti was established and defeated the action in negligence for damages for personal injury. The facts of the case were quite simple. The plaintiff was 15 years old when he was injured at the Bluebell Park which was controlled and managed by the Caboolture Shire Council (the defendant). The park had a BMX track – built and maintained by the defendant. At trial it was held that although the defendant owed a duty of care to entrants, a duty was not owed to the plaintiff. The judge found that the plaintiff was different to other entrants who used facilities provided by a council in a public park. The plaintiff was not relying upon the defendant to provide a BMX track with jumps that were reasonably safe as the evidence was that the track was regularly altered by third parties and the plaintiff knew that. Therefore it was reasoned that the plaintiff was relying upon the ability of the third parties who modified the jump and his own ability to use it, not the ability of the defendant to provide a reasonably safe track (at [10]). The trial judge also held that if a duty was owed, the defence of volenti applied so as to defeat the claim for damages. This was based upon the evidence that the plaintiff knew of the modification of the jump by third parties and knew of the risk. It was held that the plaintiff ‘had the appropriate subjective appreciation of the risk’ (at [11])