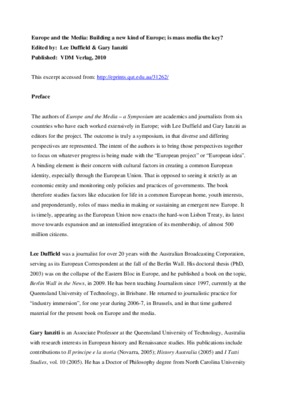 Europe and the Media: Building a new kind of Europe; is mass media the key?

The book is a joint effort of eight academics and journalists, Europe specialists from six countries (Australia, Germany, Poland, Slovenia, the United Kingdom and the United States). They give sometimes divergent views on the future of the so-called “European Project”, for building a common European economy and society, but agree that cultural changes, especially changes experienced through mass media, are rapidly taking place. One of the central interests of the book is the operation of the large media centre located at the European Commission in Brussels – the world’s largest gallery of permanently accredited correspondents. Jacket notes: The Lisbon Treaty of December 2009 is the latest success of the European Union’s drive to restructure and expand; yet questions persist about how democratic this new Europe might be. Will Brussels’ promotion of the “European idea” produce a common European culture and society? The authors consider it might, as a culture of everyday shared experience, though old ways are cherished, citizens forever thinking twice about committing to an uncertain future. The book focuses on mass media , as a prime agent of change, sometimes used deliberately to promote a “European project”; sometimes acting more naturally as a medium for new agendas. It looks at proposed media models for Europe, ranging from not very successful pan-European television, to the potentials of media systems based on national markets, and new media based on digital formats. It also studies the Brussels media service, the centre operated by the European Commission, which is the world’s largest concentration of journalists; and ways that dominant national media may come to serve the interests of communities now extending across frontiers. Europe and the Media notes change especially as encountered by new EU member countries of central and eastern Europe