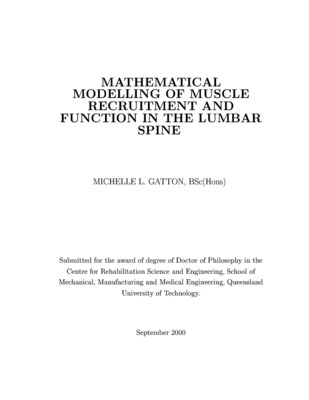 Mathematical modelling of muscle recruitment and function in the lumbar spine

Low back pain is an increasing problem in industrialised countries and although it is a major socio-economic problem in terms of medical costs and lost productivity, relatively little is known about the processes underlying the development of the condition. This is in part due to the complex interactions between bone, muscle, nerves and other soft tissues of the spine, and the fact that direct observation and/or measurement of the human spine is not possible using non-invasive techniques. Biomechanical models have been used extensively to estimate the forces and moments experienced by the spine. These models provide a means of estimating the internal parameters which can not be measured directly. However, application of most of the models currently available is restricted to tasks resembling those for which the model was designed due to the simplified representation of the anatomy. The aim of this research was to develop a biomechanical model to investigate the changes in forces and moments which are induced by muscle injury. In order to accurately simulate muscle injuries a detailed quasi-static three dimensional model representing the anatomy of the lumbar spine was developed. This model includes the nine major force generating muscles of the region (erector spinae, comprising the longissimus thoracis and iliocostalis lumborum; multifidus; quadratus lumborum; latissimus dorsi; transverse abdominis; internal oblique and external oblique), as well as the thoracolumbar fascia through which the transverse abdominis and parts of the internal oblique and latissimus dorsi muscles attach to the spine. The muscles included in the model have been represented using 170 muscle fascicles each having their own force generating characteristics and lines of action. Particular attention has been paid to ensuring the muscle lines of action are anatomically realistic, particularly for muscles which have broad attachments (e.g. internal and external obliques), muscles which attach to the spine via the thoracolumbar fascia (e.g. transverse abdominis), and muscles whose paths are altered by bony constraints such as the rib cage (e.g. iliocostalis lumborum pars thoracis and parts of the longissimus thoracis pars thoracis). In this endeavour, a separate sub-model which accounts for the shape of the torso by modelling it as a series of ellipses has been developed to model the lines of action of the oblique muscles. Likewise, a separate sub-model of the thoracolumbar fascia has also been developed which accounts for the middle and posterior layers of the fascia, and ensures that the line of action of the posterior layer is related to the size and shape of the erector spinae muscle. Published muscle activation data are used to enable the model to predict the maximum forces and moments that may be generated by the muscles. These predictions are validated against published experimental studies reporting maximum isometric moments for a variety of exertions. The model performs well for fiexion, extension and lateral bend exertions, but underpredicts the axial twist moments that may be developed. This discrepancy is most likely the result of differences between the experimental methodology and the modelled task. The application of the model is illustrated using examples of muscle injuries created by surgical procedures. The three examples used represent a posterior surgical approach to the spine, an anterior approach to the spine and uni-lateral total hip replacement surgery. Although the three examples simulate different muscle injuries, all demonstrate the production of significant asymmetrical moments and/or reduced joint compression following surgical intervention. This result has implications for patient rehabilitation and the potential for further injury to the spine. The development and application of the model has highlighted a number of areas where current knowledge is deficient. These include muscle activation levels for tasks in postures other than upright standing, changes in spinal kinematics following surgical procedures such as spinal fusion or fixation, and a general lack of understanding of how the body adjusts to muscle injuries with respect to muscle activation patterns and levels, rate of recovery from temporary injuries and compensatory actions by other muscles. Thus the comprehensive and innovative anatomical model which has been developed not only provides a tool to predict the forces and moments experienced by the intervertebral joints of the spine, but also highlights areas where further clinical research is required