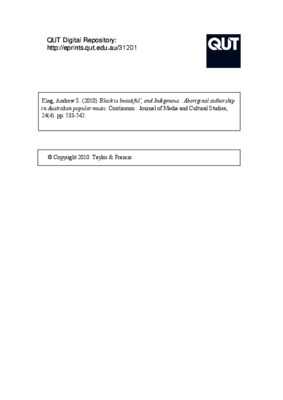 The ‘black is beautiful’ movement began in the United States in the early sixties, and changed mainstream attitudes towards the body, fashion and personal aesthetics, gaining African American people a new sense of pride in being – and being called – ‘black’. In Australia the movement also had implications for changing the political meanings of ‘black’ in white society. However, it is not until the last decade, through the global influence of Afro-American music, that a distinctly Indigenous sense of black sexiness has captured the attention of mainstream audiences. The article examines such recent developments, and suggests that, through the appropriation of Afro-American aesthetics and styles, Indigenous producers and performers have developed new forms of Indigenous public agency, demonstrating that black is beautiful, and Indigenous