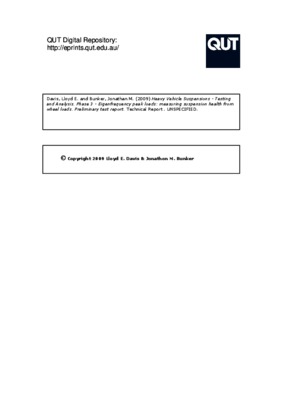 One response to requests from the transport industry to allow more “freight efficient” heavy vehicles (HVs) onto the road network has been that road authorities have allowed higher axle loads in return for HVs being equipped with “road-friendly” suspensions. These suspensions (particularly those with air springs) are critically dependant on shock absorber health for proper operation. These suspensions are only certified, however, as “road-friendly” at the time of manufacture and this via a type-test. Once in service, the “road-friendliness” is determined solely by the maintenance regime of the transport operator. One of the triggers for shock absorber replacement in the road transport industry is tyre wear. Blanksby et al., (2006) showed that this was not a good determinant of damper wear as over 54% of a statistically significant sample of "road-friendly" HVs did not meet at least one of the criteria in the Australian standard for "road-friendly" HV suspensions (Blanksby et al., 2006). Previous reports on the prevalence of, and increased damage done by HVs with worn, out-of-specification or defective suspension dampers have been commissioned and published (Blanksby et al., 2006; Cebon, 2004; Costanzi & Cebon, 2005, 2006). The results in this report align with the conclusions of that work and indicate that Qld Main Roads could save approximately $76M/annum were HV operators to maintain their shock absorbers to manufacturers' specifications. There is no in-service test for HV suspensions in Australia yet. In-service testing for “road-friendliness would advantage the transport industry and road asset owners. The former because worn dampers could be replaced before vehicle and payload damage occurs; high-mileage but still serviceable shock absorbers need not be replaced (saving labour and equipment costs). The latter through reductions in road and bridge asset rehabilitation costs through less wear-and tear from HVs with out-of-specification or deficient shock absorbers. That a test would be advantageous has been recognised by the Australian Government, the States of New South Wales and Queensland. These organisations are funding a programme to develop an in-service suspension test for HVs. The expansion of higher mass limits (HML) routes across Queensland and New South Wales was made conditional on such a test being developed (Australia Department of Transport and Regional Services, 2005a, 2005b). The National Transport Commission (NTC) is the project manager for the development of this test. This report examines a test methodology involving a moderate-cost test bed that provides a low-cost-per-test methodology for an in-service HV suspension test. The results are presented within the context of a “proof-of-concept” test programme. The preliminary results indicate that low-cost-per-test suspension testing is possible with a moderate-cost testing rig. Under the joint QUT/MR project Heavy vehicle suspensions – testing and analysis a test bed has been developed by modifying the roller from a HV brake tester. This test bed was designed to impart a known vibration to the wheel of a HV under test. This by having flat portions machined into the roller that, when the roller was spun, imparted a cyclic vibration to the wheel of the HV under test. The modified brake-testing machine was instrumented with load cells at the bearings of the roller. No instrumentation was installed, nor required, on the HV. A wheel load approximating full load was used. Damping on the wheel of the test HV was varied in three stages:  none (no shock absorbers);  worn to the point of tyre wear; and  meeting the manufacturer's specification (i.e. new shock absorber). The preliminary results from this test programme show that: • the dynamic signals from the load cells may be used to determine the threshold beyond which HV suspensions cause tyre wear and road damage compared with when they are new; and • a moderate-cost testing machine to perform bulk, low-cost HV suspension testing is possible at the “proof-of-concept” level. This is a preliminary report covering only one test load and three different shock absorber conditions. The timing of the NTC project, the delivery schedule of the NTC's consultant's report and the timetable for the tests outlined herein has necessitated that this report has had to be truncated with respect to the level of detail that should be supplied in an ideal situation. This report and other reports (available as analysis continues) will be sent to the National Transport Commission (NTC) as a contribution to the in-service suspension test project and will also form part of the final output in the QUT/Main Roads project Heavy vehicle suspensions – testing and analysis