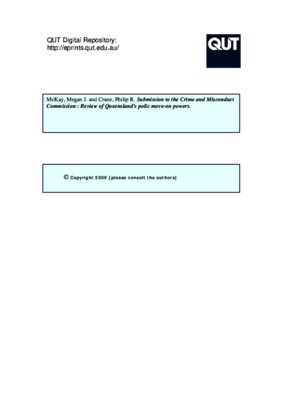 Submission to the Crime and Misconduct Commission : Review of Queensland's polic move-on powers

This submission draws extensively, but not exclusively, on a thesis written by Ms Megan McKay (2008) as part of a Bachelor of Arts (Honours) degree undertaken at the Queensland University of Technology. This thesis explores the espoused and underlying purposes and practice of the Queensland police move-on powers, a topic which, to date, has been largely unexplored (McKay, 2008, pp. 19 – 20). Given the limited number of empirical studies into Queensland’s police move-on powers, this of itself makes the research relevant to the Review. The Submission makes four recommendations. 1. That a defence of ‘reasonable excuse’ and/or a ‘vulnerable persons provision’ be included in the PPRA 2000 and made available to persons issued with a move-on direction 2. that the subjectiveness of the move-on legislation be reduced 3. that all move-on directions issued be recorded by police and that these records be accessible to the public 4. The establishment of a whole of government mechanism/ strategy for examining the way that public spaces can be managed, configured and serviced so as to be inclusive of the diversity of public space users (including the marginalised groups referred to in this submission) whilst being mindful of concerns regarding safety, lawful behaviour, and economic and social wellbeing