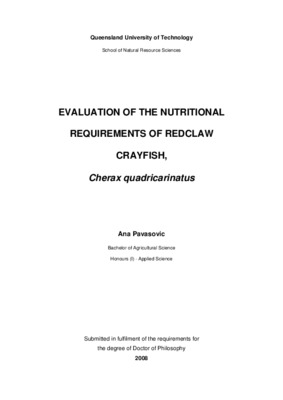 Evaluation of the nutritional requirements of redclaw crayfish, Cherax quadricarinatus

Aquaculture represents a sustainable alternative to natural fisheries for provision of high quality, animal protein. Crustaceans make a significant contribution to global aquaculture production, of which decapods are the most economically important group. Among freshwater crayfish, the genus Cherax includes several species that have emerged as important culture species. A suite of favourable biological attributes, including fast growth and an omnivorous feeding habit, have contributed to establishment of successful culture of Cherax quadricarinatus (redclaw) in many countries. Aspects of redclaw production, however, remain relatively undeveloped, in particular feed formulation. To better understand the digestive processes and nutritional requirements of redclaw, this study examined the relationship between diet composition and digestive enzyme activity, growth performance and diet digestibility coefficients. The extent to which redclaw can efficiently utilise complex polysaccharides, such as cellulose, has been speculated on by authors who reported endogenous cellulase activity in this species. I evaluated the use of insoluble α-cellulose by redclaw, demonstrated that high dietary levels (30%) can significantly reduce the specific activity of selected digestive enzymes (amylase and cellulase), while also lowering apparent digestibility coefficients. Inclusion of α-cellulose above 12% also significantly reduced survival rate, specific growth rate and feeding efficiency in this organism which corresponds with low tolerance for insoluble fibre by other decapods. Even though redclaw possess endogenous cellulases, they appear to have only a limited capacity to utilise insoluble fibre in their diets. Further, I assessed the impact of different nutrient profiles on digestive enzyme activity, growth and tail muscle composition in redclaw. Purified diets containing varying levels of dietary protein significantly affected activity of digestive enzymes (protease, amylase and cellulase) and the composition of the tail muscle tissue. Redclaw have a relatively low protein requirement, which was reflected here, as little significant difference was observed in growth rates and the feed conversion ratio was only significantly affected by the lowest protein diet. Manipulation of the non-protein energy component in purified diets (protein to lipid ratio) had no effect on growth performance indices in redclaw. Digestive enzyme activity (protease) was however, strongly influenced by both the amount of protein and lipid in the diet and a significant correlation was observed between protease activity and growth performance indices. The findings here, provide preliminary data for consideration of digestive enzymes such as proteases as potential growth indicators for freshwater crayfish. These enzymes are already recognised as reliable biological indicators for comparison of digestive efficiency and potential growth rate in fish. The relationship between diet composition and digestive enzyme expression observed here, stress the need for further empirical evaluation of specific ingredients in artificial diets for redclaw. A range of single cell, plant and animal-based, agricultural products were assessed for their potential use in diets formulated for redclaw. Analysis of dietary supplements revealed that apparent digestibility of crude protein was generally higher for diets containing plant-based ingredients. A similar outcome was observed for digestibility coefficients of test ingredients. Ingredient type also had a significant effect on digestive enzyme activity. Importantly, a significant correlation was observed for enzyme activity and apparent digestibility coefficients. It appears that redclaw have the capacity to utilise nutrients from a broad range of dietary ingredients successfully including animal, single cell and in particular, plant matter in their diet. Taken together, the results presented here demonstrate that digestive enzyme activities in redclaw are significantly influenced by diet composition. I show clearly that the ability of redclaw to utilise various nutrients (measured as digestibility coefficients) is highly correlated with digestive enzyme activity. Finally, protease activity demonstrated a potential for use as an indicator of redclaw growth performance. The data presented here will contribute to development of better and cheaper feed formulations for use in redclaw aquaculture and have broader applications to freshwater crustacean culture. In particular, the potential for use of plant-based ingredients in aqua-feeds for redclaw will contribute to a more economically and environmentally sustainable redclaw culture