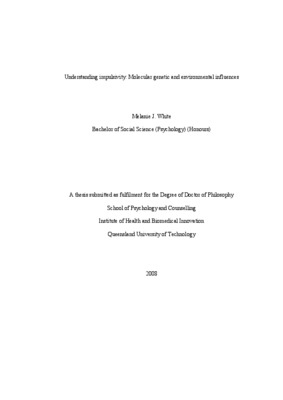 Features of impulsivity underlie multiple psychological disorders. The body of work examining impulsivity has largely focussed on self-report measurement and has incorporated psychological constructs without reference to the broader biological factors that may influence impulsive behaviour. Two studies were conducted to examine whether environmental stress and genetic status associated with dopaminergic and serotonergic function (DRD2, ANKK1 and 5HT2AR genotypes) were predictive of dimensions of impulsivity and risky behaviour (alcohol use). The two studies used a multi-method approach in a non-clinical community sample of young adults (aged 17-25 years). Dopamine is integral to the two leading theories of impulsive personality, Gray's Reinforcement Sensitivity Theory and Cloninger's Psychobiological model of personality. Dopamine plays a crucial role in reward reinforcement circuits in the brain. The A1 allele of the ANKK1 gene (also referred to as TaqIA of the DRD2 gene region) and the CC genotype of the C957T polymorphism of the DRD2 gene have both been associated with reduced D2 dopamine receptor density in key structures linked to brain reward. In addition, a strong body of evidence implicates their involvement in a number of clinical disorders associated with impulsivity. Serotonin function has also been associated with impulsivity in Cloninger's theory and there is also evidence of associations of two polymorphisms of the 2A serotonin receptor gene (5HT2AR T102C and -1438A/G SNPs) with impulsivity. Acute and chronic forms of stress are also important correlates of impulsive behaviour and the two studies directly examined the relationship between genotype, stress and impulsivity. Study 1 (N=180) utilised a cross-sectional design and examined interactions between these polymorphisms and chronic stress exposure on key impulsivity dimensions of reward sensitivity, Novelty Seeking and rash impulsiveness. Participants completed psychological questionnaires measuring chronic stress, dimensions of impulsivity, mood and substance use and provided mouth swab samples of buccal mucosal cells for DNA analysis. The study confirmed the association between A1 and CC allelic status and chronic stress being associated with harm avoidance and sensitivity to punishment. This suggests a role for both dopamine and background stress in impulsive behaviour. Study 2 (N=73) built upon this questionnaire research in the laboratory by utilising experimental psychological paradigms of impulsive behaviour and experimentally manipulating acute stress. Study 2 employed a mixed experimental design with a sub-sample of those studied in the cross-sectional sample. These behavioural paradigms included pre- and post- stress induction administration of the Card Arranging Reward Responsiveness Objective Test (capturing behavioural approach in the presence of reward cues, presumed to reflect reward sensitivity) and post-induction delay discounting and response inhibition measures. Study 2 confirmed the role of one of the two dopamine-related polymorphisms, with those with A1+ allelic status demonstrating lower reward responsiveness prior to rest or stress induction, which was overcome in the second administration of this task, independent of environment. A1+ allelic individuals also demonstrated significantly poorer response inhibition independent of stress, further confirming the association between A1+ allelic status and impulsivity. Those with CC allelic status showed an increase in reward responsiveness only in the stress induction condition. Together, results from the two studies inform the development of a multidimensional model of impulsivity that captures gene-environment influences on discrete aspects of impulsive personality and behaviour. Further refinement of this model may lead to the development of more effective customised prevention and treatment interventions for clinically disordered impulsivity. The implications of dopaminergic systems and stress in understanding disorders such as ADHD and substance dependence are discussed