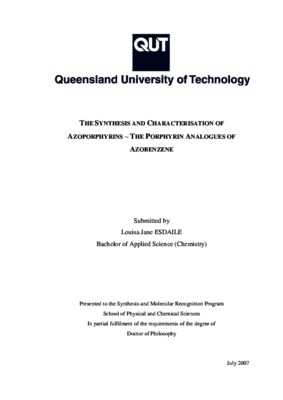 The synthesis and characterisation of azoporphyrins : the porphyrin analogues of azobenzene

Due to the prevalence of porphyrins and their derivatives in Nature, there is a wide interest in the synthesis, design and exploitation of their properties. Their electron delocalisation, and the ease with which the electronic system can be perturbed and manipulated, have meant that porphyrins have been investigated for applications in many avenues. Conjugated, multiporphyrin oligomers have been studied as light-harvesting system mimics, molecular wires and sensors. It has been predicted that the azo-linkage should enable superior porphyrin-to-porphyrin interaction. Preparation of an azo-linked bis(porphyrin) was approached by reacting protected hydrazines with bromoporphyrins. A series of mono- and bis-substituted porphyrinoids including novel diiminoporphodimethenes was synthesised using palladium-catalysed reactions, and spectroscopic, structural and redox properties of these products were investigated. The manner in which a bis-substituted product evolved from a mono-activated starting material was studied. The synthesis of these products was refined to produce each product selectively. These products display interesting redox properties, and several of them exhibit greatly red-shifted absorption spectra. The palladium-catalysed synthesis of primary and secondary aminoporphyrins, as well as a hydroxyporphyrin, from the reaction of bromoporphyrins with unsubstituted hydrazine was discovered and investigated. The synthesis of these products was optimised to yield each novel porphyrinoid selectively. Some of the electronic and structural properties of these products were studied, and the unique bis(porphyrin)secondary amine exhibited excitonic coupling between the macrocycles. A porphyrin dyad with an azo-linkage was isolated, and its synthesis was optimised, initially using palladium-catalysed homocoupling of aminoporphyrins, and then using copper catalysis. The synthesis of this "azoporphyrin" was optimised to obtain the desired dimers in high yields and the properties of these dimers were studied and contrasted with those of other conjugated porphyrin dimers. The absorption spectra exhibited greatly split Soret bands and intense, red-shifted Q-bands, while cyclic voltammetry showed a decrease in the HOMO-LUMO gap, indicative of extremely efficient porphyrin-porphyrin interaction. Two crystal structures of azoporphyrins were obtained, and the dihedral angle and the distance between the mean planes of the macrocycles were also significantly smaller than those found for the analogous (E)-ethene-linked dimers. A series of novel "head-to-tail" porphyrin dyads was also isolated and characterised, and these exhibited interesting spectral features, including very broad and red-shifted Q-bands and split Soret bands in their absorption spectra