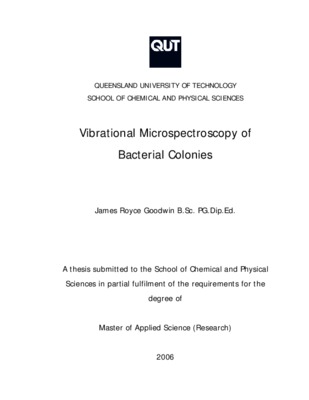 Vibrational spectroscopy, mainly infrared spectroscopy, has been applied to bacteria, yeast and archaea cells for many years, for example, for the purpose of developing a rapid method of identification. More recently microcolonies have been used for consistency with the preparation and culture protocols of traditional microbiological methods. Heterogeneity of microcolonies has not been well studied. Investigation of heterogeneity may provide detailed biochemical information leading to an understanding of how colonies grow and the link to the growth cycle. Investigation of regions within bacterial colonies using FT-IR microspectroscopy was applied to two prokaryotes, the Gram-negative archaeon Halobacterium salinarium and the Gram-positive bacterium Bacillus stearothermophilus. Two-dimensional maps of the entire colony and point maps, spectra taken from key regions such as the periphery and centre of the colony, were acquired. The approximate size of the colonies ranged from 250-950 μm. The infrared data for the Gram-negative archaeon, H. salinarium supports that for the Gram-positive bacterium, B. stearothermophilus, despite the microorganisms being of different domains and Gram types. It was concluded that the periphery of the microcolony approximately equates to the exponential growth phase (and possibly the lag phase) where the younger cells reside, while the centre approximates to the death and stationary phases. However the spatial resolution proved to be a limiting factor, so Raman microspectroscopy was employed to address this. Raman spectra across the diameter of microcolonies ranging from 100-300 μm of the pigmented bacterial species Halobacterium salinarium revealed variations in the carotenoid bands. It was suggested that these variations correspond to growth rings, which relate to the growth cycle and the consolidation and migration phase of the cells. The carotenoid variation was rather clear mainly due to the enhanced spectral intensity due to resonance with the laser excitation source. Hence, pigmented bacterial colonies are ideal to study by Raman spectroscopy. The results of this particular aspect of the research are to be published in the Journal of Raman Spectroscopy [1]. In addition, a connection between the consolidation and migration phases and the phases of the growth cycle has been postulated as a novel hypothesis to link the periodic dynamics of the colony and the growth mechanisms at the cellular level. The Raman microspectroscopic study was extended to non-pigmented bacterial colonies directly on the growth medium. This was a more difficult endeavour as the spectra taken do not have the resonance enhanced advantage of a pigmented bacterium. In addition the sampling volume can consist of variable amounts of growth medium thus decreasing the signal-to-noise ratio and reducing the accuracy of subsequent spectral calculations. However, this was overcome to a large extent by the use of confocal microscopy. The non-pigmented bacterial colonies investigated were Bacillus stearothermophilus and Bacillus subtilis. Analysis, by band area ratios and by chemometric approaches, of radial line map spectra of both Bacillus species revealed variation of nucleic acid concentration. The higher nucleic acid concentration is likely to be a result of cells in the exponential growth phase as rapid growth of new cells is occurring