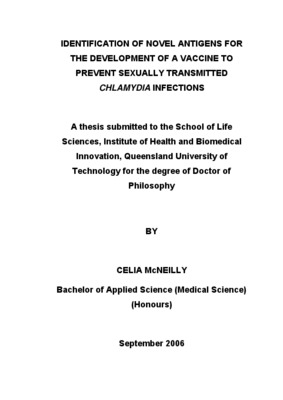 Chlamydia trachomatis infections are among the most frequently reported causes of human sexually transmitted infection. In Australia, the reported rate of infection in 2004 reached 175 per 100,000 population, the highest rate since surveillance of the condition began in 1991. Severe adverse sequelae that commonly occur following progression of the infection from the lower to the upper genital tract include pelvic inflammatory disease, infertility and ectopic pregnancy. However the frequent prevalance of asymptomatic infection makes diagnosis and treatment often late and therefore ineffective against upper genital tract complications. Hence there is a great need to develop a vaccine to protect against the sexual transmission of C.trachomatis. Despite many years of research investigating potential vaccine strategies to prevent sexually transmitted C.trachomatis infections, there remains no commercially available C.trachomatis vaccine. Early research showed that the use of live, attenuated or inactivated whole Chlamydia as a vaccine was not a viable option due to adverse effects caused by immunopathogenic cellular components. The early human vaccine trials that utilized whole chlamydial cells and resulted in exacerbated disease when immunized individuals were re-exposed to Chlamydia have led to the investigation of chlamydial subunit components as potential vaccine antigens. The most widely investigated vaccine candidate antigen is the major outer membrane protein (MOMP) as it is known to be immunogenic and surface exposed. Much research using this antigen has been undertaken with the antigen being delivered as a protein, peptide or DNA, via many mucosal and systemic routes of immunization, and in combination with various vaccine adjuvants. However, at best only partial protection against a chlamydial genital tract infection has been achieved. Only a few alternative candidate antigens have been investigated as potential vaccine targets to protect against chlamydial infections. These include the outer membrane porin PorB, the large cysteine rich outer membrane protein Omp2 and the heat shock proteins DnaK and GroEL. Although other candidate antigens have been predicted in various models of chlamydial infection (Finco et al., 2005; Stemke-Hale et al., 2005; Li et al., 2006), few have been tested for their protective efficacy. The aim of this study was to use expression library immunization to screen the whole C.muridarum genome for novel vaccine candidates capable of protecting against a chlamydial genital tract infection. C.muridarum was selected as the disease model for chlamydial genital tract infection as it has similarities to C.trachomatis in pathogenesis, immune response to infection and gene content and order. Once protective antigens had been isolated from an expression library, these were screened individually for immunogenicity and protective efficacy in the C.muridarum model of infection. An expression library containing over 21,000 recombinant C.muridarum clones was constructed and divided into pools of clones. DNA was extracted from these pools and used to immunize mice through gene gun technology, delivering 1μg of DNA to the abdomen of mice. Following the immunization regime, mice were challenged intra-vaginally with live C.muridarum as this route of infection best resembles the natural route of infection that is responsible for the sexual transmission of C.trachomatis in humans. Four in vivo screens of the C.muridarum expression library, each time using reduced numbers of clones, resulted in the identification of seven novel vaccine antigens that conferred protection against a genital tract challenge infection in mice. These warrant further investigation as vaccine antigens in the development of a vaccine against C.trachomatis infection. The identified antigens include antigens not conventionally believed to be potential vaccine candidates such as hypothetical proteins and housekeeping genes, including a DNA gyrase subunit, TC0462, and the ATP-dependent Clp protease, ATP-binding subunit ClpC, TC0559. Other antigens identified were more traditional, surface exposed vaccine targets that have not been previously investigated as vaccine targets, including a novel outer membrane protein, TC0512, a polymorphic membrane protein, TC0693, and TC0850, a protein of the type three secretion system, a family of proteins that allow gram-negative bacteria to inject virulence related proteins into the cytoplasm of a host cell. All antigens were shown to be partially protective with the putative outer membrane protein TC0512 showing an overall reduction in chlamydial burden of 55% and other antigens showing overall reductions in chlamydial burden of 26 - 44%. These antigens were also either capable of stimulating an immune response, or predicted to contain epitopes that may stimulate strong immune responses and so warrant further investigation as vaccine antigens to protect against chlamydial genital tract infections. The results of this research demonstrate that it is possible to identify novel vaccine targets through screening an expression library in a disease model. This study has identified several novel vaccine targets that are partially-protective against a C.muridarum infection and that are thought to be capable of stimulating strong immune responses. These antigens have high homology with C.trachomatis sequences, indicating that they have potential as vaccine candidates capable of protecting against the serovars of C.trachomatis that cause sexually transmitted infections in humans. Although the protection observed in this study was only partial, the immunization strategy utilised only fragments of the genes, an immunization mechanism known to elicit Th2 type immune responses, and no adjuvant to enhance the immunogenicity of the antigens. Through different immunization routes and in conjunction with adjuvants that stimulate Th1 type immune responses, complete protection against chlamydial genital tract infections may be achieved