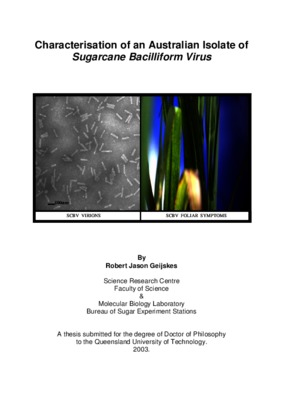 Characterisation of an Australian isolate of sugarcane bacilliform virus

Sugarcane bacilliform virus (SCBV) is an economically important pathogen of sugarcane in Australia which limits access to foreign sugarcane germplasm. Although SCBV is present in the major cane growing regions worldwide, very little is known about its variability, virulence and the yield losses resulting from infection. The limited information on SCBV has resulted in quarantine measures being introduced to protect the Australian sugarcane industry, with a major consequence being restricted access to imported sugarcane germplasm for breeding programs. Foreign sugarcane germplasm plays an important role in breeding of new commercial varieties for the Australian sugar industry and is essential for the long term productivity, profitability and sustainability of the sugar industry. This study was aimed at characterising Australian isolates of SCBV to enable the development of reliable and robust molecular and/or antibody-based diagnostic tests which could be used to not only assess the impact of SCBV on the Australian sugarcane industry, but could also be used to screen imported sugarcane germplasm for the virus. SCBV virions (SCBV-IM) were purified from the sugarcane accession "Ireng Maleng" and the dsDNA genome was cloned and sequenced. The genome of SCBV-IM comprised 7687 bp with an organisation typical of other badnaviruses. When the entire nucleotide sequence of SCBV-IM was compared to that of the Moroccan SCBV isolate (SCBV-Mo), less than 75% similarity was present. Within the coding regions, ORF I, ORF II and ORF III had 83%, 71% and 73% nucleotide similarity to SCBV-Mo, respectively. At the amino acid level, ORFs I, II and III from SCBV-IM showed 91%, 84% and 85% similarity to the equivalent regions in SCBV-Mo, respectively. To further investigate the level of sequence variability within Australian SCBV isolates, virions were purified from three further sugarcane accessions and a 220 bp fragment of the reverse transcriptase-coding region was amplified. Five clones from each sub-population were selected and sequenced. Analysis of these sequences revealed considerable variability in the virus population with variability within one plant as great as it was between isolates. However, since the use of specific primers could also be selecting for a sub-population of SCBV sequences, it was possible that the variability may actually be greater than that reported. These results indicated that SCBV isolates are complex and variable and may represent a continuum of genetic variability. High molecular weight DNA species larger than the SCBV 7.6 kbp unit-length genome were found in DNA extracted from purified SCBV-IM virions. We confirmed that these high molecular weight nucleic acids were virus-specific and open circular in conformation. Using field inversion gel electrophoresis (FIGE), the SCBV-IM DNA was separated into four discrete bands with sizes ranging from between 1 to 4 genome copies. The DNA was shown to comprise overlapped individual genome-length molecules and not covalently-bonded continuous DNA strands. We presume that these DNA molecules are concatamers formed during replication as a result of a terminal overlap on the sense strand. The presence of these concatamers within virions may explain the observation of particles with lengths corresponding to one, two or three times the modal length of 130 nm. Four SCBV-infected Saccharum officinarum plants were examined for the presence of integrated viral DNA. Southern blot analysis of viral DNA and total DNA extracted from the same plant source were compared with, or without, restriction digestion. The resulting restriction patterns from viral and total DNA were almost identical suggesting that there were no integrated SCBV sequences in the sugarcane cultivars tested. Although larger-than-single-genome copy bands were detected in both the viral and the total DNA samples, this was probably due to the presence of genomic concatamers. SCBV integration studies using Southern analyses were further complicated by high sequence variability which precluded the restriction digestion of all viral DNA species. As such, some of the SCBV DNA species remain as concatamers which appear as larger-than-unit-length SCBV products. An antiserum derived from a mixture of purified SCBV isolates has been used routinely in the past to screen for SCBV infection, but the heterogeneity reported for badnaviruses has cast doubt on the ability of this antiserum to detect all SCBV isolates. We attempted to determine whether antiserum generated against proteins other than the viral capsid could be used to detect SCBV infections, thus improving the reliability and robustness of SCBV diagnosis. The complete coding regions of SCBV ORF I and ORF II were bacterially expressed and used as antigens for antiserum production. Both ORF I and II proteins were found to be highly immunogenic and generated high-titre antisera, designated AS-I and AS-II, respectively. The diagnostic utility of both antisera to detect SCBV in six different infected sugarcane plants was tested using both immunosorbent electron microscopy (ISEM) and western blots. The currently used SCBV antiserum (AS-V), generated against a mixture of purified SCBV isolates, was included for comparison. In western analyses, neither AS-I nor AS-V was able to conclusively detect SCBV in any of the six infected plants due to reactivity with numerous non-specific proteins. In contrast, AS-II reacted specifically with a protein of the expected size (~13.5 kDa) in 2/6 infected plants. When compared using ISEM, AS-V, AS-I and AS-II trapped virions from 6/6, 6/6 and 2/6 SCBV-infected plants, respectively. However, the number of virions trapped using AS-V was approximately 30-fold more than that trapped using either AS-I or AS-II. These results highlight the variability between SCBV isolates and suggest that ISEM with antisera raised against mixtures of viral proteins may be a useful tool for the detection of viral isolates