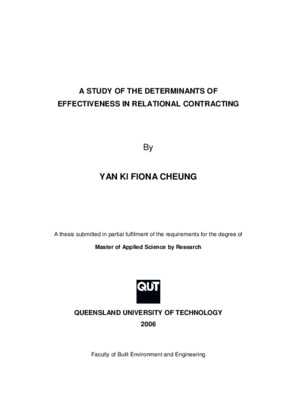 A study of the determinants of effectiveness in relational contracting

The significance of a link between organisational culture and organisational performance has long been recognised in both mainstream management literature as well as in the construction management literature. Within the construction research domain, the impact of culture and organisation on project performance is becoming an increasingly important topic for the establishment of sound partnering or alliancing, or to what has been referred to increasingly in recent years as relational contracting, in the overall approach to project management. However, studies of the efficacy of alliancing or partnering have so far produced mixed results. The present study concerns two public sector organisations in Australia, where the interrelationships between organisational culture and structure, commitment and national culture were investigated. The methodology was triangulated; with a detailed questionnaire survey undertaken with both organisations, and with subsequent interviews and case studies carried out for validation. Multivariate statistical techniques were utilised to investigate complex relationships between variables. The research reports the perceptions of professional personnel in the public sector organisations, and some mismatches found between organisational structuring and organisational culture. Key issues affecting project performance, and the set of project team characteristics enhancing the development of a collaborative project culture, were found to include continuous commitment from all levels, right mix of people, formal and informal communication, continuous facilitation, education and training in the universities, institutions and industry. The combined outcomes of the research provided a framework of fundamental elements for successful relational contracting