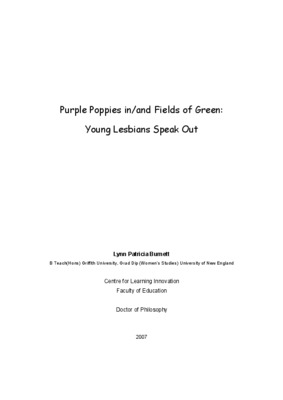 Non-heterosexually identified young people, particularly those with a lesbian identity, have always experienced a marginalised position within Australian culture (Burnett, 1997; Gamson, 2000; Signorile, 1995; Thonneman, 1999). There is very little empirical research available which explores the experiences of lesbian, gay, bisexual and transgender lives (Brown, 1995; Burnett, 1997; Gamson, 2000). Hence myths, stereotypes, invisibility, lack of understanding and marginalisation of non-heterosexual identified people continue to be perpetuated in mainstream Australian society (Baird, 2005; Burnett, 1997; MacBride-Steward, 2004). The anthropological study presented in this dissertation was designed to explore and theorise the lived experiences of young lesbians post-initial coming-out within an Australian context using Memory Work methodology (Haug, 1987). The first goal of this project was to describe and provide details of the under researched and misunderstood lives of young lesbians between the ages of 23 and 33 years of age who had identified as lesbian for between two and ten years; what is termed here as post-initial coming-out. The second goal of the study was to gain insight into how young lesbians, post-initial coming-out, make sense of their lives, selves and identities, and positioning within society given the negative myths and stereotypes which currently exist within the general population in relation to people with non-heterosexual identities. The literature and data presented throughout the dissertation highlight the issues of invisibility, marginalisation, and homophobia experienced by each of the participants within a predominately heterosexual society. They also emphasised the inner strength and resilience developed by each of the participants in the face of adversity as they attempted to construct and make sense of their self narrative and positioning as defined by themselves and the positioning and identity imposed upon them by significant others. The data have been organised into four main focus areas; negotiating the family, work, heterosexual and lesbian landscapes. Lastly, the study sought to further develop and refine the Memory Work methodology (Haug, 1987), particularly as it pertains to a doctoral research program. This study has been able, via the use of Memory Work methodology, to provide richly descriptive and in-depth snap-shots of the lives of young lesbians post-initial coming-out in an Australian context which represents a unique contribution to the research literature. The study concludes with reflections on the methodology as it pertains to a doctoral research program and recommendations for further research which have developed as a result of this investigation. The five participants in this study were strong, independent, brave young wimmin searching for acceptance and an understanding of their post-initial coming-out lesbian identities in an Australian context. While there were only a small number of participants, their memories and experiences yield rich new insights into the everyday lives and experiences of young lesbians