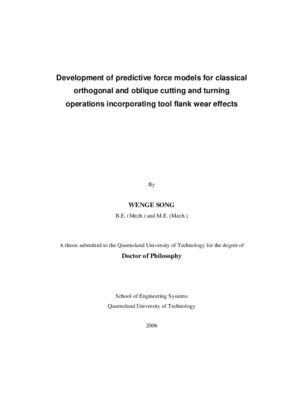 Classical orthogonal and oblique cutting are the fundamental material removal or machining processes to which other practical machining processes can be related in the study and modelling of the machining processes. In the last century, a large amount of research and development work has been done to study and understand the various machining processes with a view to improving the processes for further economic (cost and productivity) gains. However, many aspects of the cutting processes and cutting performance remains to be fully understood in order to increase the cutting capability and optimize the cutting processes; in particular, there is little study to understand the effects of the inevitable tool wear on the machining processes. This thesis includes an extensive literature review on the mechanics of cutting analysis. Considerable work has been carried out in past decades on the fundamental analysis of 'sharp' tool cutting. Although some work has been reported on the effects of tool flank wear on the cutting performance, there is a general lack of the fundamental study of the effects of the flank wear on the basic cutting or chip formation process. It has been well documented that tool flank wear results in an increase in the cutting forces. However, it was not known if this force increase is a result of the change in the chip formation process, and/or the rubbing or ploughing forces between the tool flank and the workpiece. In work carried out since the early 1980s, the effects of the so-called edge forces have been considered when the tool is not absolutely sharp. Little has been reported to further develop fundamental cutting theories to understand applications to more relevant the practical situation, i.e. to consider the tool wear effects. Based on the findings of the literature review, an experimental investigation is presented in the first part of the thesis to study the effects of tool flank wear on the basic cutting or chip formation process by examining the basic cutting variables and performance in the orthogonal cutting process with tool flank wear. The effects of tool flank wear on the basic cutting variables are discussed by a comprehensive analysis of the experimental data. It has been found that tool flank wear does not affect the basic cutting variables (i.e. shear angle, friction angle and shear stress). It is therefore deduced that the flank wear does not affect the basic chip formation process in the shear zone and in the tool-chip interface. The study also finds that tool flank wear causes an increase in the total cutting forces, as can be expected and such an increase is entirely a result of the rubbing or ploughing forces on the tool wearland. The significance of this finding is that the well-developed machining theories for 'sharp' tools can be used in modelling the machining processes when tool flank wear is present, rather than study the machining process and develop machining theories from scratch. The ploughing forces can be modelled for incorporation into the overall cutting force prediction. The experimental study also allows for the forces on the wearland (or wearland force) and edge forces to be separated from the total measured forces. The wearland force and edge force models are developed in empirical form for force prediction purpose. In addition, a database for the basic cutting variables or quantities is established for use in modelling the cutting forces. The orthogonal cutting force model allowing for the effects of flank wear is developed and verified by the experimental data. A comprehensive analysis of the mechanics of cutting in the oblique cutting process is then carried out. Based on this analysis, predictive cutting force models for oblique cutting allowing for the effects of flank wear are proposed. The wearland force and edge force are re-considered by analysing the oblique cutting process and the geometrical relation. The predictive force models are qualitatively and quantitatively assessed by oblique cutting tests. It shows that the model predictions are in excellent agreement with the experimental data. The modelling approach is then used to develop the cutting force models for a more general machining process, turning operation. By using the concept of an equivalent cutting edge, the tool nose radius is allowed for under both orthogonal and oblique cutting conditions. The wearland forces and edge forces are taken into consideration by the integration of elemental forces on the tool flank and the cutting edge, respectively. The cutting forces in turning operations are successfully predicted by using the basic cutting quantity database established in the orthogonal cutting analysis. The models are verified by turning operation tests. It shows that the model predictions are in excellent agreement with the experimental results both qualitatively and quantitatively. The major findings, research impacts and practical implications of the research are finally highlighted in the conclusion. The modelling approach considering the flank wear effects in the classical orthogonal and oblique cutting and turning operations can be readily extended to other machining operations, such as drilling and milling